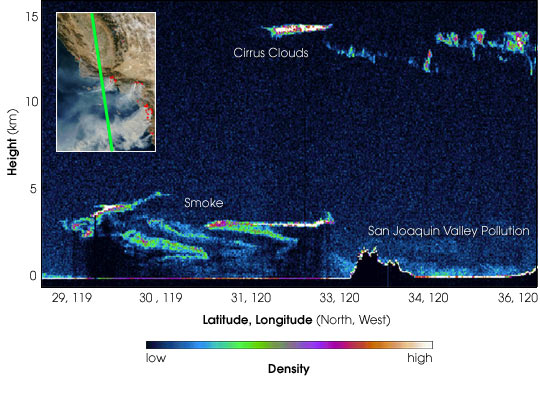 A new instrument in orbit aboard NASA’s ICESat satellite—the Geoscience Laser Altimeter System (GLAS)—reveals another dimension of the California wildfires. By transmitting a green beam of laser light downward at the Earth and then precisely measuring how much of that light is backscattered back up into space, GLAS can determine the vertical structure of clouds, pollution, or smoke plumes in the atmosphere. This GLAS observation over the eastern Pacific Ocean, acquired on October 28, 2003, shows the thick smoke plumes emanating from several large wildfires burning in southern California. The image represents a vertical slice of Earth’s atmosphere, from sea level to 16 km in altitude. The image inset (upper left) reveals the precise path (green line) of GLAS’ observation path as the ICESat satellite flew overhead, as compared to the same scene observed about 7 hours earlier by Aqua MODIS.

The zig-zag features toward the lower left of the image show the smoke plumes from the fires rising up as high as 5 km above the surface. The much thinner features toward the upper right are high-level cirrus clouds. The large black feature jutting up above sea level shows the mountain range separating Santa Barbara from the San Joaquin Valley. Note the low-lying pollution over San Joaquin Valley.

The colors of the features in the air in this image represent how much laser light a given feature reflects back to space. This measure, called “backscatter coefficient,” directly relates to the density of smoke and clouds. The thickness of the smoke plumes increase as the colors graduate from blue (low values), to green (intermediate values), to orange, and finally to white (very high values). Note the “shadows” under the thickest portions of the smoke plumes.

The ICESat sensor is now making these same measurements over biomass burning sites every day all over the world. Such measures are helping scientists understand how smoke is carried by winds, how smoke mixes with and modifies clouds, and how smoke affects the heating of Earth’s atmosphere as the smoke scatters and absorbs incoming solar radiation. Large-scale biomass burning is unusual in the United States. However, it is a common practice in many parts of the world, especially in South America and Africa, where fire is a primary tool used in agriculture as well as to help clear away forests for human development. Scientists are interested in observing the smoke from biomass burning on a global scale because it can significantly affect climate.