The Strait of Gibraltar in 3D 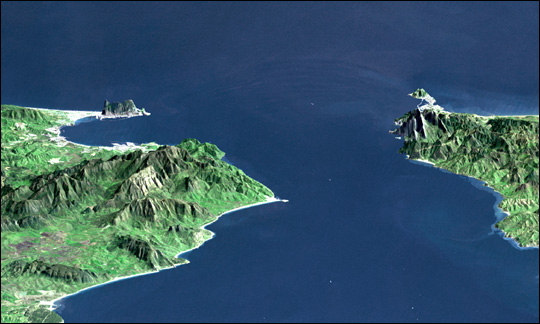 This perspective view shows the Strait of Gibraltar, which is the entrance to the Mediterranean Sea from the Atlantic Ocean. Europe (Spain) is on the left. Africa (Morocco) is on the right. The Rock of Gibraltar, administered by Great Britain, is the peninsula in the back left.

The Strait of Gibraltar is the only natural gap in the topographic barriers that separate the Mediterranean Sea from the world’s oceans. The sea is about 3,700 kilometers (2,300 miles) long and covers about 2.5 million square kilometers (1 million square miles), while the Strait is only about 13 kilometers (8 miles) wide. Sediment samples from the bottom of the Mediterranean Sea that include evaporite minerals, soils, and fossil plants show that about 5 million years ago the strait was topographically blocked and the Sea had evaporated into a deep basin far lower in elevation than the oceans. Subsequent changes in the world’s hydrologic cycle, including effects upon ocean salinity, likely led to more ice formation in polar regions and more reflection of sunlight back to space, resulting in a cooler global climate at that time. Today, topography plays a key role in our regional climate patterns. But through the Earth’s history, topographic change, even perhaps over areas as small as 13 kilometers across, has also affected the global climate.

This image was generated from a Landsat satellite image draped over an elevation model produced by the Shuttle Radar Topography Mission (SRTM). The view looks eastward with a 3-times vertical exaggeration to enhance topographic expression. Natural colors of the scene (green vegetation, blue water, brown soil, white beaches) are enhanced by image processing. The scene includes some infrared reflectance (as green) to highlight the vegetation pattern as well as shading of the elevation model to further highlight the topographic features.

Landsat has been providing visible and infrared views of the Earth since 1972. SRTM elevation data matches the 30-meter (99-feet) resolution of most Landsat images and will substantially help in analyses of the large Landsat image archive.

Elevation data used in this image were acquired by the Shuttle Radar Topography Mission (SRTM) aboard the Space Shuttle Endeavour, launched on February 11, 2000. SRTM used the same radar instrument that comprised the Spaceborne Imaging Radar-C/X-Band Synthetic Aperture Radar (SIR-C/X-SAR) that flew twice on the Space Shuttle Endeavour in 1994. SRTM was designed to collect three-dimensional measurements of the Earth’s surface. To collect the 3-D data, engineers added a 60-meter-long (200-foot) mast, installed additional C-band and X-band antennas, and improved tracking and navigation devices. The mission is a cooperative project between the National Aeronautics and Space Administration (NASA), the National Imagery and Mapping Agency (NIMA) of the U.S. Department of Defense (DoD), and the German and Italian space agencies. It is managed by NASA’s Jet Propulsion Laboratory, Pasadena, CA, for NASA’s Earth Science Enterprise.