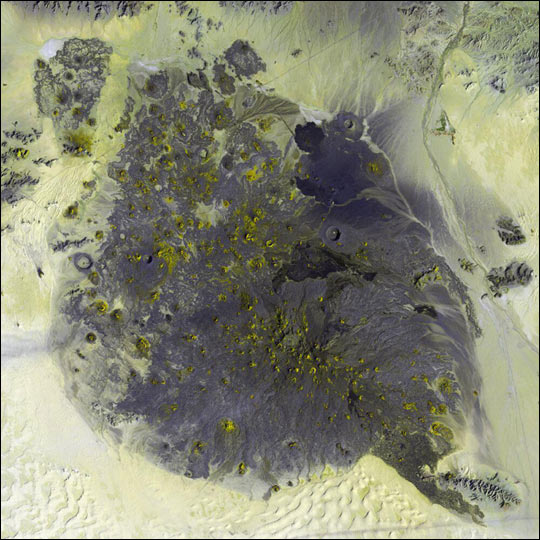 Pinacate National Park and Biosphere Reserve is a 770-square-mile (2,000-square-kilometer) volcanic field in the Sonora province of Mexico, near the Arizona border. Surrounded by the Sonora Desert, this field contains more than 300 volcanic vents and cinder cones, including at least 10 maar craters. Maar eruptions are a rare form of volcano that erupts violently when rising magma meets underground water, producing a pocket of highly pressurized steam that blows a nearly circular hole in the crust above. The largest crater in the Pinacate Field is Cerro Elegante, a maar crater about a kilometer in diameter.

Though parts of Pinacate are so barren and other-worldy that the area served as a training ground for moonward-bound astronauts, many places do support plant and animal life, including creosote bushes, prickly pear cactus, ironwood trees, the Gila woodpecker, and the Rufous hummingbird.

This image of the park was captured by the Landsat 7 satellite on December 5, 2002, using bands 7, 5, and 2. The dark cinders covering the lava plain dominate the center of the scene, and numerous circular craters are visible. To the south, the sands of the Sonora Desert are carved into sinuous dunes. At top center, a diagonal gray line marks a road that runs toward the Mexico-U.S. border.