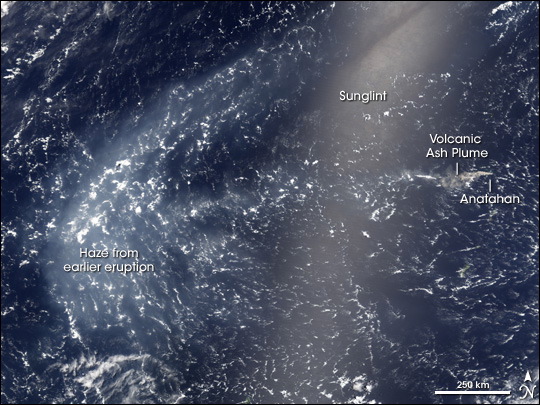 Volcanic tremors resumed under the Anatahan Volcano on May 18, 2005, according to the current update from the United States Geological Survey and the Emergency Management Office for the Northern Mariana Islands. Tremor activity peaked on May 20 then declined until May 23. The tremor amplitudes have since resurged.

Anatahan still showed signs of activity when the Moderate Resolution Imaging Spectroradiometer (MODIS), flying on the Terra satellite, acquired this image on May 25, 2005. Volcanic tremors occur when magma rises inside the volcano or when the volcano erupts. In this image, Anatahan, on the right, is clearly erupting, sending a brown plume of ash westward over the Philippine Sea. Further west, volcanic gasses from a previous eruption have gathered in a thick white haze called "vog."

When sulfur dioxide and other volcanic pollutants mix with water and oxygen in the presence of sunlight, the result is volcanic smog, or vog, a potentially hazardous material. This picture shows all the ingredients necessary to make vog: a volcanic ash plume, plenty of water, and sunlight. The sunlight is particularly obvious as the sunglint in the center of the image. When the sun and the satellite are at the same angle to the ocean, sunlight bounces off the ocean surface and reflects directly into the satellite sensor.

Image by Jesse Allen, based on data from the MODIS Rapid Response Team at NASA Goddard Space Flight Center.