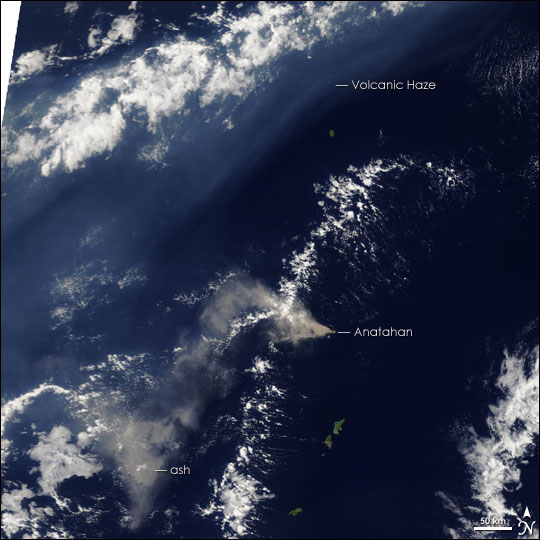 Two different types of volcanic emissions were clearly visible on May 1, 2005, when the Moderate Resolution Imaging Spectroradiometer (MODIS) on NASA’s Terra satellite captured this image. First, a thick plume of ash and steam snakes west, then southwest from the erupting Anatahan Volcano. Second, a veil of volcanic haze curves northeast across the Pacific Ocean. The haze formed as sulfur dioxide from the volcano mixed with water in the atmosphere to form a fog of sulfuric acid. The haze is highly reflective, so it stands out starkly against the dark ocean waters.

On the day this image was acquired, the United States Geological Survey and the Northern Mariana Islands Emergency Management Office reported that the haze covered 2,593 kilometers (1,400 nautical miles) of ocean, and within the volcanic cloud, visibility had dropped to 4 kilometers (2.5 statute miles). The ash plume rose to a height of about 3,000 meters (10,000 feet).

Anatahan has been erupting since early January 2005, sending plumes of ash and steam into the atmosphere with varying regularity. On April 6, the volcano erupted explosively with its largest recorded eruption. Since that time, the plume rising from the volcano has been more or less constant. Daily images of the volcano are available from the MODIS Rapid Response Team.