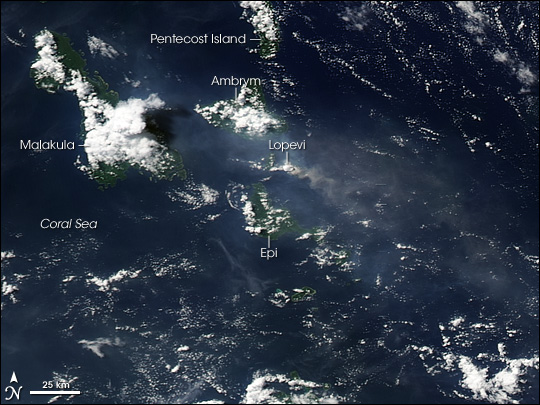 Vanuatu’s Lopevi Volcano released a plume on May 3, 2007. The same day, the Moderate Resolution Imaging Spectroradiometer (MODIS) on NASA’s Aqua satellite captured this image of the plume and its larger consequences. The U.S. Air Force Weather Agency reported an extensive area of vog resulting from the volcanic eruption. When gases from a volcano—particularly sulfur dioxide—react with oxygen, water, dust, and sunlight, volcanic smog (or vog) results.

Besides Lopevi and its neighboring islands, this image shows the volcanic plume blowing westward away from the volcano. The plume appears as a small, mostly opaque puff of gray-beige. The resulting area of vog, which appears as a more transparent, dingy-gray haze, dwarfs the diminutive plume.

Lopevi is a stratovolcano composed of alternating layers of solidified lava, hardened ash, and volcanic rocks. One of the island nation’s most active volcanoes, this volcanic island is only about 7 kilometers (4 miles) wide. Eruptions have been recorded at Lopevi since the middle of the 19th century.

You can download a 250-meter-resolution Lopevi KMZ file for use with Google Earth.

The Soufriere Hills volcano on the Caribbean island of Montserrat released a plume of ash and/or steam in late November 2008.