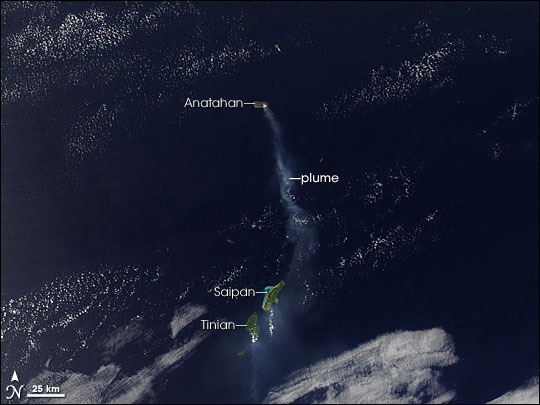 On March 17, 2007, the Anatahan Volcano, in the Northern Mariana Islands, released a plume of ash and/or steam. The Moderate Resolution Imaging Spectroradiometer (MODIS) flying onboard the Aqua satellite captured this image on March 18, 2007, as the volcano’s emissions continued. In this image, the volcanic plume pushes toward the southeast then changes direction slightly and aims for the islands of Saipan and Tinian. The volcanic plume is a little darker and more diffuse in shape than the nearby opaque white clouds.

Volcanic emissions of sulfur dioxide sometimes react with water and sunlight to create vog—a haze that hangs over the region. Previous eruptions of Anatahan have created substantial vog. Although the chemical composition of the plume cannot be identified from a single picture, south of Saipan and Tinian, the plume takes on an extra-hazy appearance consistent with volcanic fog. The same day MODIS acquired this image, the U.S. Air Force Weather Agency reported an odor of sulfur (which would also suggest the presence of vog) on Guam, approximately 200 kilometers southwest of Saipan.

Anatahan is a stratovolcano composed of alternating layers of hardened lava, ash, and rock. Its first recorded eruption occurred in May 2003.