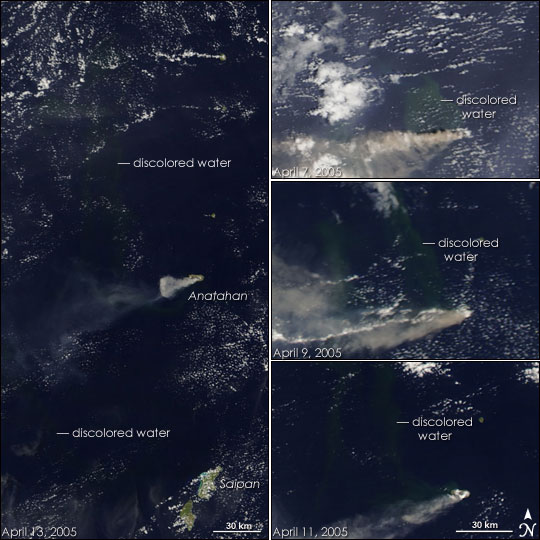 A week after its largest eruption in recorded history, the Anatahan volcano is still steaming. A plume of ash and steam rises from the volcano in this series of Moderate Resolution Imaging Spectroradiometer (MODIS) images, acquired between April 7 and April 13, 2005, by NASA’s Terra and Aqua satellites. On April 6, the volcano erupted explosively, sending approximately 50 million cubic meters of ash up to 15,240 maters (50,000 feet) into the air. As of April 12, the ash plume had spread over 2,200 kilometers (1,200 nautical miles) west of the volcano to the Philippine Sea.

The large eruption also impacted the ocean, as this series of images shows. Starting on April 7, the ocean to the north of the volcano had turned green. Two days later, the circular discoloration had expanded to a ring of green on the north and west sides of the volcano. By April 11, the ring of green water took on a brown shade and expanded even further. On April 13, the discolored water was dark brown, only faintly visible against the black ocean water. The band of discolored water forms a long oval that radiates away from the island to the north and the south, nearly reaching Saipan in the south. A second faint brown-green band of water rings Anatahan.

There are several possible explanations for the discolored ocean water, says Frank Trusdell, a geologist with the U.S. Geological Survey at the Hawaiian Volcano Observatory. Trusdell has been monitoring Anatahan’s eruption in collaboration with geologists from Saipan. First, ash may have settled in the water near the volcano. Light-colored ash floating near the surface of the ocean would reflect light, giving the water the green tint seen here. The ash would have thinned as it drifted away from the island, reflecting less and less light as it did so. This would account for the darkening color on later days.

A second possible explanation is that phytoplankton are feasting on the iron-rich ash that has settled in the water. After Anatahan’s first recorded eruption in May 2003, the ocean sprang to life around the volcano. The newly-fallen ash served as fertilizer for tiny ocean plants, called phytoplankton, that grow near the ocean’s surface. Dense phytoplankton blooms give the ocean a green tint in satellite imagery. When the blooms die, they fade to brown and disappear as the plants sink into the ocean.

There are other, far less plausible explanations for the discoloration seen in these images, says Trusdell, but it’s impossible to pinpoint the cause without information from the ground. A week after the eruption, the area around the volcano remains sealed off as Anatahan continues to let off steam, reminding its observers that it’s not finished yet.