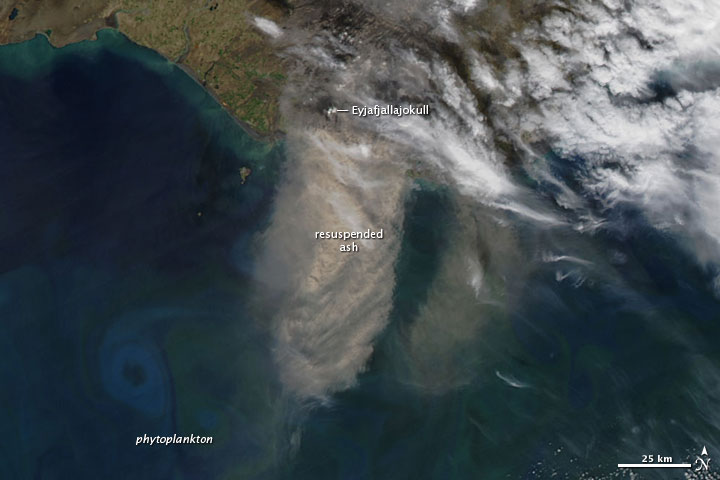 By May 26, 2010, when the Moderate Resolution Imaging Spectroradiometer (MODIS) on NASA’s Aqua satellite captured this photo-like image, Iceland’s Eyjafjallajökull Volcano had slowed its eruption. A tiny, white puff of steam rises from the volcano in this image. Considerable steam had been coming from the crater, said the Icelandic Met Office, but monitoring the eruption became difficult because of windblown ash. The problem is illustrated here. Two broad swaths of tan ash, many kilometers across, obscure the Icelandic coastline and sweep over the Atlantic Ocean.

The ash resembles an eruption plume in color, but it is actually resuspended ash. During Eyjafjallajökull’s eruption, fine powdery ash fell around the volcano and on areas downwind. The ash still rests lightly on the land’s surface and is easily lifted in the wind. On May 26, winds blew toward the south, southeast, picking up a thick cloud of ash near the volcano.