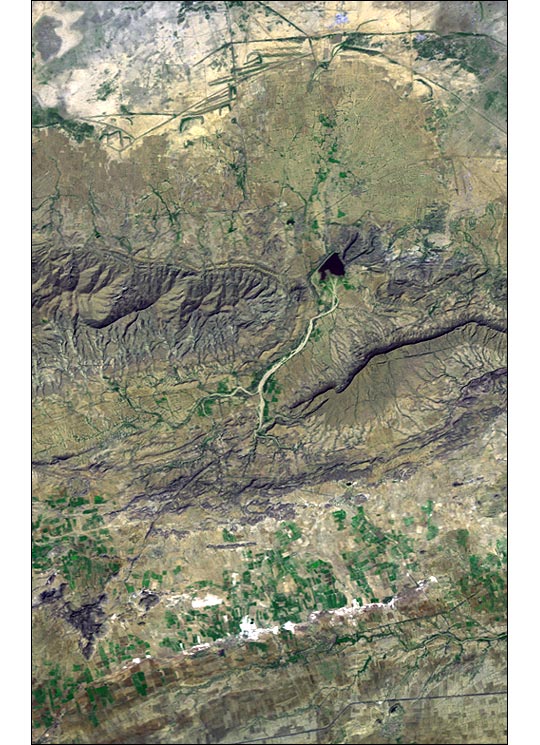 On January 26, 2001, the Kachchh region in western India suffered the most deadly earthquake in India's history. This stereoscopic view of landforms northeast of the city of Bhuj depicts geologic structures that are of interest in the study of the tectonic processes that may have led to that earthquake. However, preliminary field studies indicate that these structures are composed of Mesozoic rocks that are overlain by younger rocks showing little deformation. Thus these structures may be old, not actively growing, and not directly related to the recent earthquake.

The Haro Hills are on the left and the Kas Hills are on the right. The Haro Hills are an "anticline," which is an upwardly convex elongated fold of layered rocks. The anticline is distinctly ringed by an erosion resistant layer of sandstone. The east-west orientation of the anticline may relate to the crustal compression that has occurred during India's northward movement toward, and collision with, Asia. In contrast, the largest of the Kas Hills appears to be a tilted (to the south) and faulted (on the north) block of layered rocks. Also seen here, the curvilinear ridge trending toward the southwest from the image center is an erosion resistant "dike," which is an igneous intrusion into older "host" rocks along a fault plane or other crack. The dike also appears to extend northeast from the image center as a dark line having very little topography. Its location between the tilted block and a smaller anticline to the north (directly east of the larger anticline) probably indicates that the dike fills the fault that separates these contrasting geologic structures. These features are simple examples of how digital elevation data can stereoscopically enhance satellite imagery to provide a direct input to geologic studies.

The stereoscopic effect of this anaglyph was created by first draping a Landsat satellite image (taken just two weeks after the earthquake) over preliminary digital elevation data from the Shuttle Radar Topography Mission (SRTM), and then generating two differing perspectives, one for each eye. When viewed through special glasses, the result is a vertically exaggerated view of the Earth's surface in its full three dimensions. Anaglyph glasses cover the left eye with a red filter and cover the right eye with a blue filter.

Elevation data used in this image was acquired by the Shuttle Radar Topography Mission (SRTM) aboard the Space Shuttle Endeavour, launched on February 11, 2000.