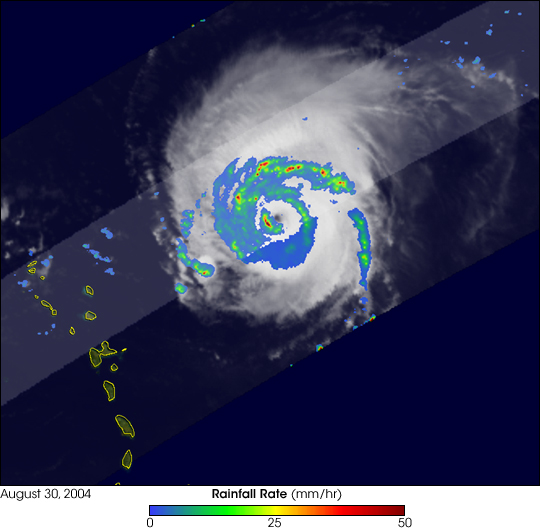 As the cleanup from Hurricane Charley continues across Florida, yet another powerful hurricane, Frances, is being closely monitored as the large, intense storm continues moving westward towards the southeast coast of the U.S. The Tropical Rainfall Measuring Mission or TRMM satellite has been monitoring the system, sending back valuable images that help forecasters at the Tropical Prediction Center (also known as the National Hurricane Center) estimate Frances' location and intensity.

Frances became a tropical depression during the night of the 24-25th of August 2004 about 900 miles southwest of the Cape Verde Islands. Cape Verde storms typically form closer to the coast of Africa from tropical easterly waves during the height of the hurricane season as water temperatures warm farther east across the Atlantic. Frances quickly organized, becoming a tropical storm the next day on the 26th and a hurricane the following day on the 27th. Initially, Frances moved west-northwest but then took a slight turn towards the northwest as a midlatitude trough weakened the ridge that was north of the storm and responsible for steering it westward. Conditions remained ideal for strengthing, however, and Frances intensified into a major Category 4 hurricane by the evening of the 28th with maximum sustained winds estimated at 115 knots (132 mph) by the National Hurricane Center. The next day Frances turned back to a more westerly coarse as the midlatitude trough lifted out and the subtropical ridge restrengthened north of the storm. August 30th also saw Frances weaken slightly possibly due to some southerly wind shear. Another factor in the intensity of major hurricanes is what as known as eyewall replacement. When this happens, the storm intensity can fluctuate, weakening for a period as a new eyewall forms outside of the original, inner eyewall. Eventually, the outer eyewall contracts, replacing the inner eyewall, which allows the storm to reintensify. The image displayed shows Frances northeast of the Leeward Islands at 10:21 UTC (06:21 am EDT) on the 30th of August. The image shows the horizontal distribution of rain intensity obtained from the TRMM satellite. Rain rates in the center part of the swath are from the TRMM Precipitation Radar (PR), the first and only precipitation radar in space. The PR can provide fine resolution rainfall data and details on the vertical structure. Rain rates in the outer swath are from the TRMM Microwave Imager (TMI). The rain rates are overlaid on infrared (IR) data from the TRMM Visible Infrared Scanner (VIRS). At the time of this image, Frances was a Category 3 hurricane with sustained winds of 105 knots (121 mph) as measured by an Air Force Reserve Hurricane Hunter Aircraft. TRMM shows the very beginning of an eyewall replacement cycle. The innermost eyewall is visible by the small semicircle of heavy (red) to moderate rain (green) just west of the center. Surrounding that is a concentric ring of moderate (green) to light (blue) rainfall that marks the beginning of a new eyewall.

The second image is from the same time and shows the height of the 15 dBZ isosurface as seen by the PR. This is associated with light rain but where hydrometeor sizes are becoming significant. The coloring indicates the height: red being high, green moderate and blue low. Here the inner eyewall is separated by the new outer eyewall by the minimum in the height of the 15 dBZ isosurface (blue area). The tall tower (red spike) southwest of the center is associated with an outer rainband.