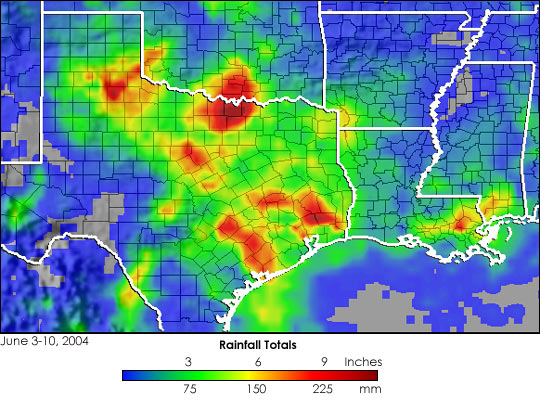 Persistent high pressure over the eastern Gulf of Mexico and Florida and low pressure over the southwestern United States combined to generate southerly winds that pumped moist air up from the Gulf of Mexico. The resultant weather pattern brought several days of showers and thunderstorms to much of eastern Texas. Areas west of Fort Worth were hardest hit with some locations reporting up to 10 inches of rainfall between Sunday, June 6, 2004, and Thursday, June 10.

The Tropical Rainfall Measuring Mission satellite, launched in November of 1997, uses both passive and active sensors to measure rainfall over the global tropics from space. The TRMM-based, near-real time Multi-satellite Precipitation Analysis (MPA) at the NASA Goddard Space Flight Center provides quantitative rainfall estimates over the global tropics. MPA rainfall totals are shown for June 3 through June 10, 2004, over the south central United States. It shows that most of the eastern half of Texas received more than 3 inches of rain (green areas). Embedded areas of higher totals on the order of 10 inches (red areas) are evident in the panhandle, north and west of the Dallas-Fort Worth area, north of Houston and around Victoria.