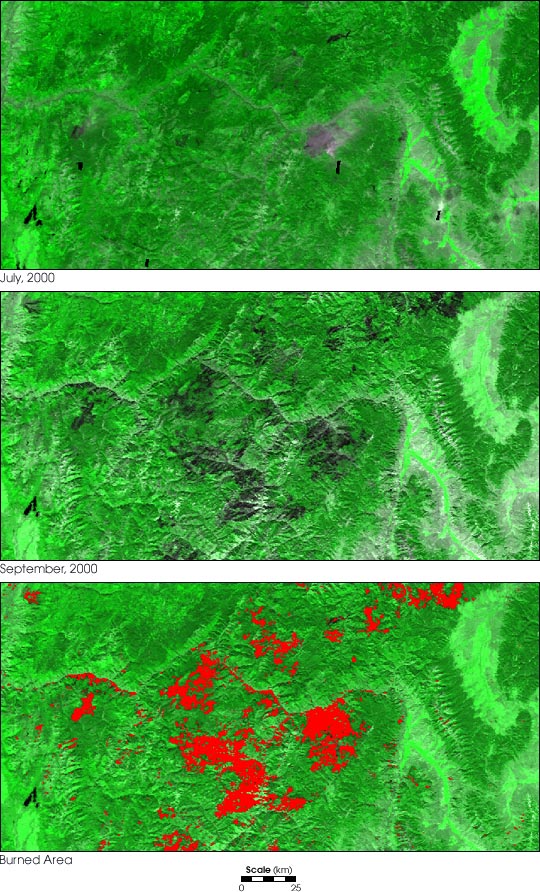 In the aftermath of one of the most devastating fire seasons in 100 years, the U.S. Forest Service is embarking on a massive rehabilitation project in the Northern and Intermountain West. With over 2 million acres burned in Montana and Idaho, the expected Burned Area Emergency Rehabilitation costs are close to $20 million dollars for those states alone.

Preliminary assessments of the extent and severity of burned areas were made through observations from firefighters in the field and via Forest Service airborne instruments, but satellite observations such as those acquired by NASA’s Moderate-resolution Imaging Spectroradiometer (MODIS), aboard the Terra satellite, provide more comprehensive evaluations of such a large burned area. The results shown here are based on data acquired by MODIS in July and September 2000.

These images are a demonstration of MODIS’s Vegetative Cover Conversion (VCC) product, which uses MODIS’ 250-meter resolution bands to assess changes in the type and amount of vegetation at locations on the Earth’s surface on a monthly basis. The 250-m bands detect light in the red and near-infrared portions of the electromagnetic spectrum. The VCC product detects change based on two characteristics of the red and infrared radiation that the Earth reflects onto MODIS’ detectors: brightness and greenness.

The brightness, or intensity, of radiation reflected from bare ground is high because there is nothing to absorb it. A dense forest, on the other hand, absorbs most of the incoming red radiation, so its brightness is low. The light that a forest doesn’t absorb well is infrared, and so heavily vegetated areas reflect a high proportion of infrared light. The combination of low red and high infrared reflectance is often referred to as "greenness."

The VCC product classifies five types of land cover based on different combinations of brightness and greenness: forest, non-forest, bare ground, flooding, and burn scar. A forest is low brightness, high greenness. When the forest is cleared for agriculture or urban development it shows the high brightness and low greenness characteristic of bare ground. So how does the VCC product detect recently burned forested land, like in these images of the Idaho/Montana border region? By detecting when a point on the ground goes from low brightness/high greenness to low brightness/low greenness, MODIS can tell where dark, partially burned vegetation has replaced green vegetation.

In these visualizations, the VCC product has identified several large burn scars, which stand out in deep green against the brighter green of the remaining forest. The area shown includes the Clear Creek, Diamond Complex, Wilderness Complex, and Valley Complex fires. The first image shows the pre-fire landscape (July 2000); the second image shows the same area after the fires (September 2000). The final image shows the VCC-detected change superimposed over the post-fire image. The total burned area shown in the large images (July 2000, September 2000, Burned Area) is 3,391 square kilometers.

MODIS’ 250-m resolution VCC product will serve as an alarm system that warns scientists of possible significant land cover change. Scientists can then turn to higher-resolution sensors such as Landat-7, ASTER, or Ikonos for a detailed look at an area. Other applications of the VCC algorithm include detection of flooding, urbanization, and logging.