The Ob River in Southern Siberia continues to remain high after heavy rain and snow pushed it over its banks. Floods along the Ob and other rivers in the region claimed the lives of at least 18 people. As of April 21, 2004, the Ob River and the Tom River, a tributary of the Ob north of the region shown in this Moderate Resolution Imaging Spectroradiometer (MODIS) image pair, had inundated 2,800 houses. Though the floods had begun to recede by April 23, when the flood image was taken by the Aqua satellite, the region was bracing for more snowmelt. Ice jams in the river also contributed to the flooding, and bombs had been dropped to clear the ice.

The image taken on April 11 by the Terra satellite shows the winter-time extent of the Ob River. In the false color image, light blue snow covers much of the region. It had largely disappeared by April 23. The tan and brown bare earth is marked with streaks on bright green vegetation. Clouds are light blue.

The high resolution images provided above have a resolution of 250 meters per pixel, MODISï¿½ maximum resolution. Both the April 23 and the April 11 images are available in additional resolutions.

Flooding along the Ob River near the Kazakstan border 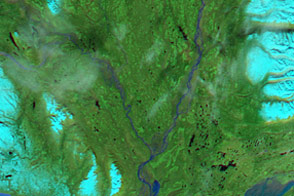