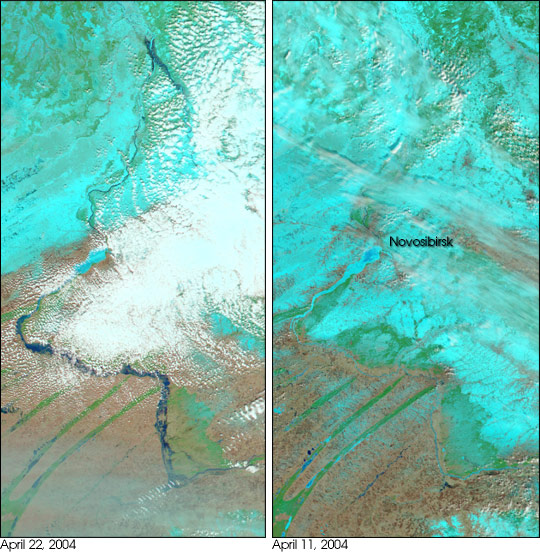 Melting snow and ice and heavy rain have combined to push rivers in Southern Siberia over their banks. Across the region, 18 people have died in the floods, and over 20,000 have been affected. This Moderate Resolution Imaging Spectroradiometer (MODIS) image from the Aqua satellite shows flooding along the banks of the Ob River, one of several flooded areas in southern Russia. When this image was taken on April 22, 2004, the flood waters had begun to recede. The city of Novosibirsk, which is labeled in the pre-flood image for reference, has not reported flooding, but is providing emergency services to affected communities downstream.

The reason for these springtime floods in obvious in this image comparison. On April 11, southern Russia was covered with snow, which appears blue in the false-color MODIS image. By April 22, the snow in the south had largely disappeared. Though the region is thawing out after winter, ice jams on the rivers are contributing to the flooding. The Russian government is working to break up the ice to prevent further flooding.

The high-resolution images provided above are at MODIS maximum resolution of 250 meters per pixel.

Flooding along the Ob River near the Kazakstan border