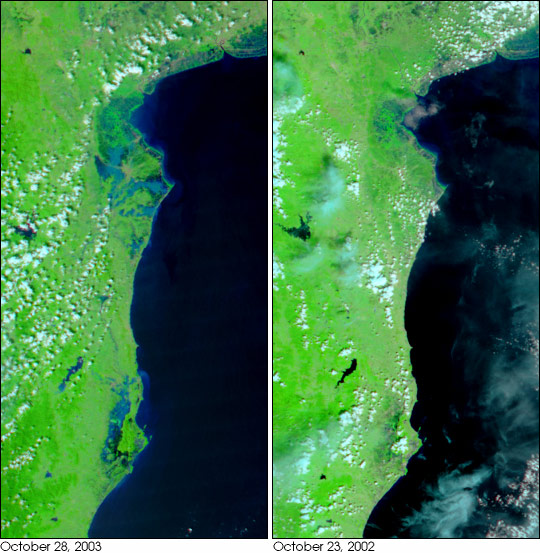 October monsoonal rains saturated Southern Thailand, swelling rivers and reservoirs. At the Kaeng Krajan dam, officials opened the spillways to drain the excess water and prevent cracking. The waters inundated the Southern Thai city of Phetchubari, causing the worst flooding the region has seen in 30 years. Three people died and 2460 homes were damaged. To the south, a separate flooding event forced 260 families out of their homes in Pran Buri. Rail travel from Bangkok to Southern Thailand was cut for three days because of the floods. For more information, see the Dartmouth Flood Observatory.

This Moderate Resolution Imaging Spectroradiometer (MODIS) pair contrasts the flooded region on October 28, 2003 to its appearance at the same time in 2002. Standing water appears light blue in these false-color images. Flood waters in the top center of the October 28, 2003 image surround a tan dot, which marks the location of Phetchubari. In the bottom half of the image, floods cover Pran Buri near the coast of the Gulf of Thailand.

The high resolution version of the October 28, 2003 image, provided above, is at MODIS’ maximum spatial resolution of 250 meters per pixel. 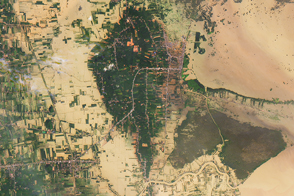