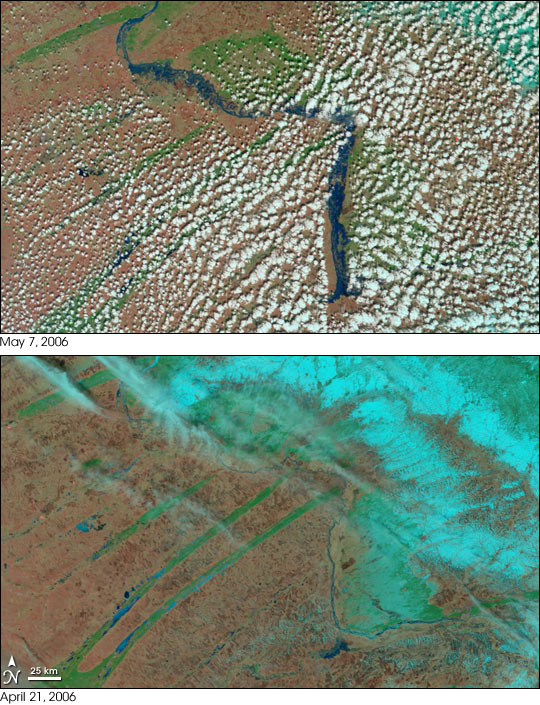 Springtime flooding in southern Siberia is not unusual. Melting snow fills the north-flowing rivers in the south even as upstream sections of the river are still frozen. Floods build up behind dams of ice, or simply build under the fast flow of spring runoff. Spring of 2006 was not exceptional. The Ob River of southern Siberia bulged with melted snow when the Moderate Resolution Imaging Spectroradiometer (MODIS) on NASA’s Terra satellite captured the top image on May 7, 2006. A little over two weeks earlier, lower image, the river was still partially frozen, as evidenced by the strips of light blue ice on the river. Snow, pale blue here, was just beginning to melt on April 21. By May 7, most of the snow was gone, and the river had expanded out over its flood plain. Under the clouds along the right edge of the image is the city of Biysk, where 1,350 houses were flooded, according to news reports. Approximately 5,000 people had evacuated from the region.

The Ob forms near Biysk where two smaller rivers converge. The smaller rivers flow out of the Altay Mountains of southern Russia and Mongolia near the borders of China and Kazakhstan. From the segment of the river shown here, the Ob will flow 3,700 kilometers (2,260 miles) north to the Kara Sea, a branch of the Arctic Ocean.

Rivers throughout Southern Siberia and Central Asia bulged with melting snow as the region began to thaw in early May 2006.

Alaska gradually thawed over the month of May as spring’s warmth crept north. The melting snow and thawing ice filled the Yukon River until it bulged over its banks with runoff.