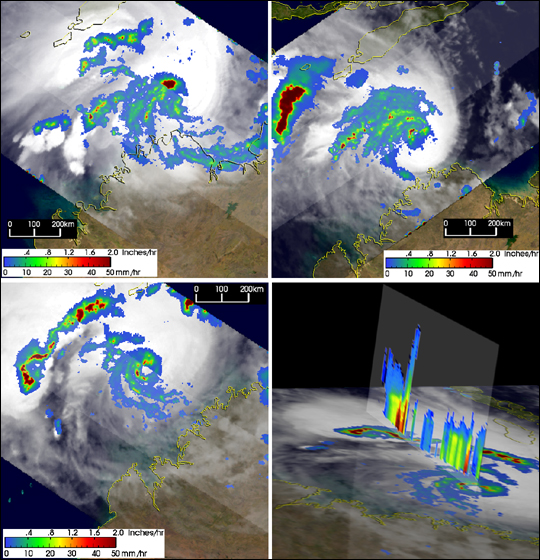 Tropical Cyclone Fay first developed into a tropical depression on the 16th of March 2004 in the Timor Sea west of Bathurst Island off the northern coast of Australia. Just twelve hours after becoming a depression, Fay became a named tropical storm with winds estimated at 35 knots (40 mph). From there, the system took a general west southwestward track parallel to the northwestern coastline of Australia. On the 18th of March, Fay was upgraded to a Category 1 cyclone with maximum sustained winds estimated at 65 knots (75 mph). Fay then continued to steadily gain in strength becoming a Category 2 cyclone on the 19th, a Category 3 cyclone on the 20th, and a powerful Category 4 cyclone on the 21st with maximum sustained winds reaching an estimated 120 knots (138 mph). Fay is expected now to take a more southerly track ahead of an advancing trough and threaten the coast of Western Australia.

The Tropical Rainfall Measuring Mission (TRMM) satellite has monitored the development of Fay capturing several unique images of the storm as it grew into a major cyclone. The first image (top left) was taken at 21:11 UTC on 17 March 2004 (5:11 am Australian WST 18 March). It shows the horizontal distribution of rain rates as seen from above by the TRMM satellite. Rain rates in the center swath are from the TRMM Precipitation Radar (PR), the first and only precipitation radar in space, while rain rates in the outer swath are from the TRMM Microwave Imager (TMI). These rain rates are overlaid on infrared (IR) data from the TRMM Visible Infrared Scanner (VIRS). At the time of this first image, Fay was still a tropical storm with winds estimated at 45 knots (52 mph). TRMM reveals that the storm is still organizing with no evidence of an eye. However, a sizeable area of intense 2-inch-per-hour rain rates (darker red area) exists near the center of circulation, and the heating generated from this rainfall can help to drive the storm's circulation and make it stronger. The next image taken over a day later at 06:05 UTC on the 19th (top right) shows that Fay had become much better organized. The banding evident in the moderate intensity rain field (green arcs) is more pronounced, and an eye has started to form in the southeast portion of the main rain area. An area of intense rain rates (darker reds) is embedded in the northwest quadrant of the eyewall. Fay was at the time a Category 1 cyclone with sustained winds of 75 knots (86 mph).

The last two images were taken at 20:00 UTC on March 20. Fay was now a Category 3 cyclone with sustained winds of 100 knots (115 mph). The eye of the storm is now readily apparent with moderate (green) to heavy (red) rain rates in the northern, western and southern portions of the eyewall. The final image (bottom right) shows a vertical slice through the center of Fay. It shows the heavy rain (red area) in the western eyewall as well as intense rain (dark reds) associated with deep convection (vertical blue/green tower) in an outer rainband well west of the center.

Tropical Cyclone Fay first developed into a tropical depression on the 16th of March 2004 in the Timor Sea west of Bathurst Island off the northern coast of Australia. Just twelve hours after becoming a depression, Fay became a named tropical storm with winds estimated at 35 knots (40 mph).