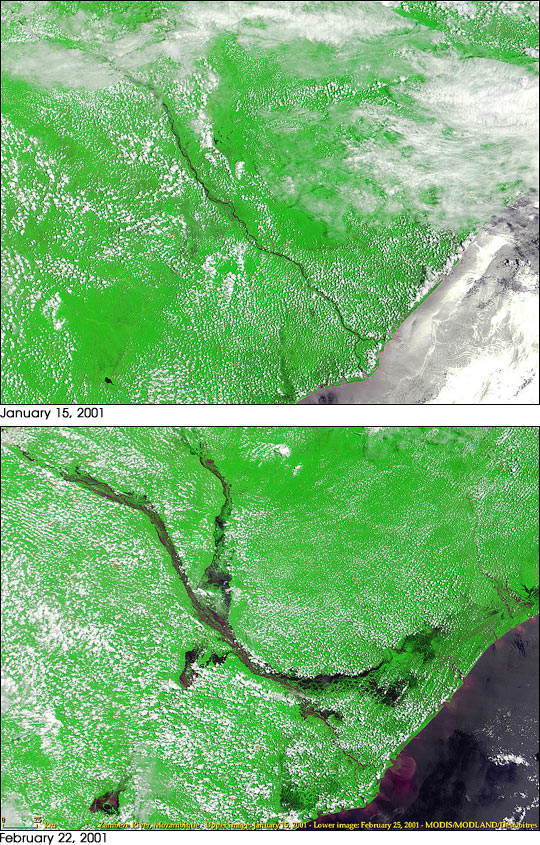 According to Reuters news reports, on February 28, 2001, rescue teams went into action again in Mozambique to evacuate hundreds of thousands of people endangered by the flooded Zambeze River (also spelled "Zambezi" by some sources). In a repeat of last year's operations in Mozambique, South African search and rescue helicopters were called in to pluck people stranded by the rising river waters. Unfortunately, 52 people have died in this event and more than 85,000 are now homeless.

This pair of Moderate-resolution Imaging Spectroradiometer (MODIS) images shows the Zambeze River before the flood (January 15, 2001) and more recently after the river overran it banks (February 25, 2001). MODIS flies aboard NASA's Terra satellite. In these false-color images, green shows land areas, the dark blue pixels are water, and the white pixels are clouds. Notice the plumes of sediment, which appear purplish in the latter scene, outflowing into the Mozambique Channel at various places along the coastline.

Notice also that most of the clouds appear over the land and appear infrequently over the Zambeze River and the Mozambique Channel (lower right corner). These clouds are formed by convection due to the intense sun warming the land to a much higher temperature than the water, which in turn warms the overlying air and contributes to cloud formation.