So what does a satellite imager measure to produce an image? It measures light that we see and light that we don’t see. Light is a form of energy—also known as electromagnetic radiation—that travels in waves. All light travels at the same speed, but the waves are not all the same. The distance between the top of each wave—the wavelength—is smaller for high-energy waves and longer for low-energy waves.

Wavelength is the distance from one peak to another, representing a single cycle of a wave. (NASA Earth Observatory image by Robert Simmon.) 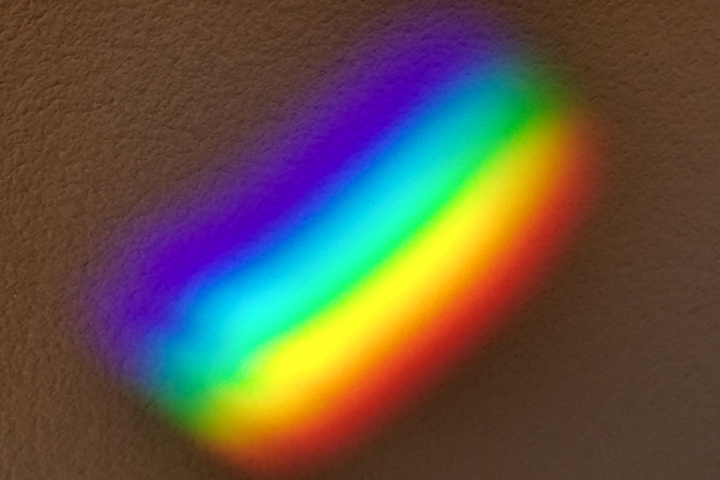 Most of the electromagnetic radiation that matters for Earth-observing satellites comes from the Sun. When sunlight reaches Earth, the energy is absorbed, transmitted, or reflected. (Absorbed energy is later re-emitted as lower-energy radiation.) Every surface or object absorbs, emits, and reflects light uniquely depending on its chemical makeup. Chlorophyll in plants, for example, absorbs red and blue light, but reflects green and infrared; this is why leaves appear green. This unique absorption and reflection pattern is called a spectral signature.

Like Earth’s surfaces, gases in the atmosphere also have unique spectral signatures, absorbing some wavelengths of electromagnetic radiation and emitting others. Gases also let a few wavelengths pass through unimpeded. Scientists call these “atmospheric windows” for specific wavelengths, and satellite sensors are often tuned to measure light through these windows.

Atmospheric windows are regions of the spectrum where most light penetrates through the atmosphere, allowing satellites to view the Earth’s surface. (Figure adapted from Casey et al, 2012.)

Some satellite instruments also directly measure the energy emitted by objects. Everything gives off energy, usually in the form of heat (thermal infrared radiation). The hotter an object is, the shorter the peak wavelength it emits. At about 400°C (750° F)—the temperature of an electric stove burner set to high—the emitted light will begin to be visible. The colder an object is, the longer the peak wavelength it emits.