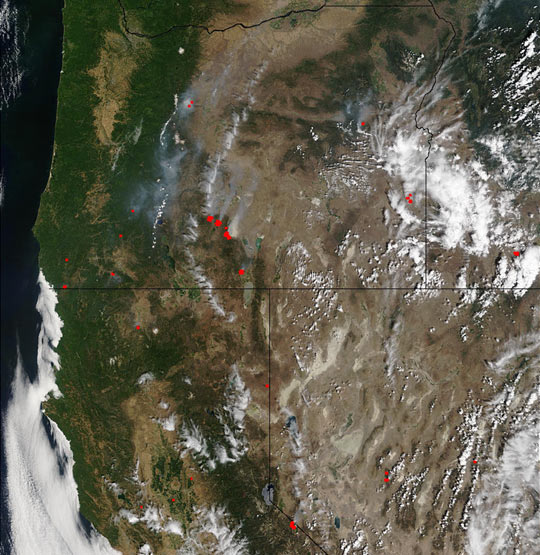 Throughout the western United States, wildfire danger is high and expected to remain so, with the peak of the annual fire season not expected until August. The total number of acres already burned is more than triple the ten-year average. National attention has shifted as one state after another experiences a flare up of forest fires—from California, to Colorado, to Arizona. This Moderate Resolution Imaging Spectroradiometer (MODIS) image from July 15, 2002, places Oregon in the spotlight, with numerous large fires (red dots) scattered throughout the state.

The northernmost fire is the Eyerly Fire, which is greater than 17,000 acres and only 40 percent contained. The four large fires dominating the south-central part of the state are the (north-south) Silver, Toolbox, Winter, and Grizzly Complex Fires. The large outline of those fires indicates that MODIS has detected active fire in numerous adjacent 1-km by 1-km pixels, which suggests fires are burning actively on many fronts. Reports from the National Interagency Fire Center state that none of those four fires is more than 5 percent contained.

To the south, a large complex of wildfires burning on the California-Nevada border south of Lake Tahoe is proving difficult to contain due to high winds and steep terrain. The Gate Complex Fire is threatening at least 275 structures, and power and water have been lost in some areas as fires burned through power lines. The fire is greater than 10,000 acres and still growing.