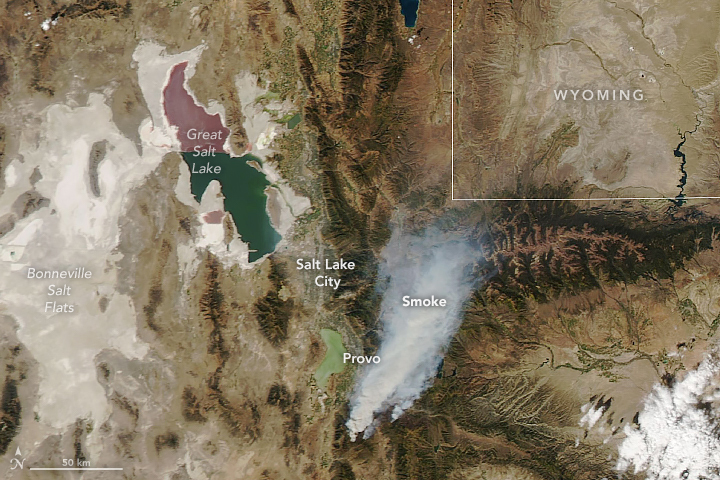 As summer ends, northeastern Utah has experienced two lightning-caused fires that have burned more than 100,000 acres. The Moderate Resolution Imaging Spectroradiometer (MODIS) on NASA's Aqua satellite captured images of both fires on September 19, 2018.

The Bald Mountain Fire in Mount Nebo Wilderness began on August 24, 2018, but grew only 20 acres over the next 2 to 3 weeks. The fire become much more active on September 12 due to low humidity and high winds. As of September 21, the fire has burned nearly 18,000 acres and was 12 percent contained.

On September 6, the Pole Creek fire ignited to the east of Bald Mountain. Four days later, strong winds fanned the flames and sent fire into some areas already scorched by the Bald Mountain Fire. Pole Creek is also burning into the Coal Hollow Fire and Diamond Fork Canyon. As of September 21, the Pole Creek Fire burned approximately 98,000 acres and was 32 percent contained.

Two lightning-caused fires have burned over 100,000 acres and are still yet to be fully contained.