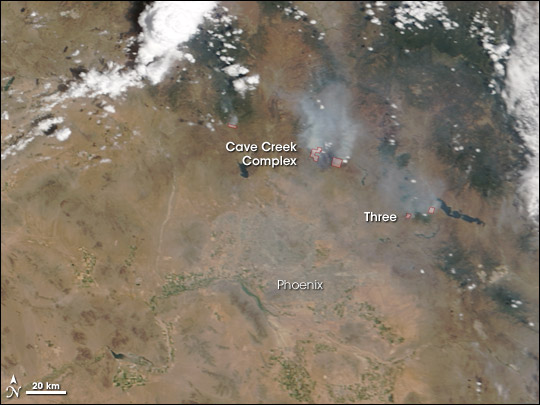 Lightning sparked the fire that is threatening homes northeast of Phoenix, Arizona. The Cave Creek Complex fire started on June 22, 2005, as two separate fires that merged into one large wildfire that was about 41,000 acres as of June 24. Strong winds and hot temperatures have thwarted attempts to extinguish the fire, and conditions are not expected to change. The fire threatens two subdivisions, and residents of 250 homes have been asked to evacuate.

The Moderate Resolution Imaging Spectroradiometer (MODIS) on NASA’s Terra satellite captured this image of the fire on June 23, 2005, at 11:50 a.m., local time. The fire, outlined with red boxes, is sending clouds of gray smoke north. The Three Fire burns in the mountains southeast of the Cave Creek Complex. The fires flank the city of Phoenix, the cement-colored circle just below the center of the image.

The first wave of the 2005 fire season began in late June when lightning triggered dozens of fires across the Southwest. New fires continued to spring up in July.