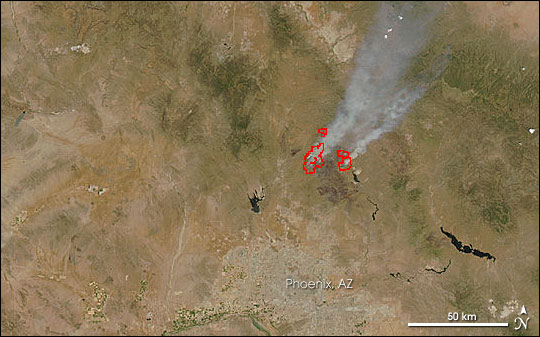 Northeast of Phoenix, Arizona, the Cave Creek Complex Fire continued to charge its way through the mountainous terrain of the Tonto National Forest. As of June 29, the National Interagency Fire Center estimated the size of the fire to be about 140,000 acres. According to their report on the fire’s status, “Pine Mountain, high-voltage power lines, Cedar Bench Wilderness, the Agua Fria National Monument, riparian areas, endangered species habitat, and archeological resources are threatened. Steep topography, extreme fire behavior, flashy fuels and poor access are impeding control efforts.”

This image of the fire was captured by the Moderate Resolution Imaging Spectroradiometer (MODIS) on NASA’s Aqua satellite on June 28, 2005. The actively burning parts of the fire that MODIS detected are outlined in red. The area the fire has burned appears dark brown.

The first wave of the 2005 fire season began in late June when lightning triggered dozens of fires across the Southwest. New fires continued to spring up in July.