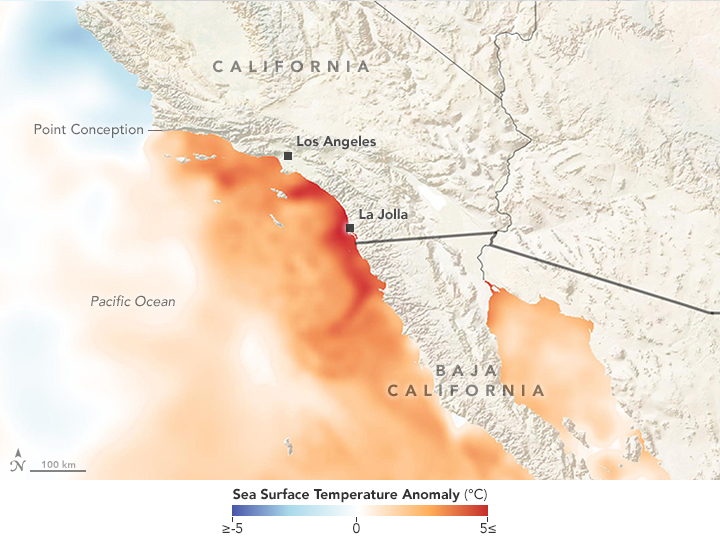 California has seen a range of natural extremes this summer, from heat waves to wildfires. The state can now add to the list record-warm ocean temperatures. On August 1, 2018, researchers from the Scripps Institution of Oceanography observed water temperatures of 25.9 degrees Celsius (78.6 degrees Fahrenheit) along the coast at La Jolla, exceeding the previous record of 25.8°C (78.4°F) set in 1931.

The warm water stretched far beyond La Jolla. The map above shows sea surface temperature anomalies on August 2, 2018, as compiled by NOAA’s Coral Reef Watch, which blends observations from the Suomi NPP, MTSAT, Meteosat, and GOES satellites and computer models. Mapping the temperature anomaly allows you to see how much the surface layer was above or below the long-term average temperature for this time of year. The warmest sea surface temperatures (red) extend from Point Conception to the Baja California coast. According to Bill Patzert, retired NASA climatologist, temperatures along this part of the coastline were 5-10°F above normal.

“The primary driver of these warm ocean temperatures is the persistence of continental atmospheric high pressure that has dominated western weather,” Patzert said. He explained that normally, high pressure over the eastern Pacific Ocean drives winds from the north along the California coast. These winds push coastal surface waters offshore, allowing cool waters from below to “upwell” to the surface and keep coastal California cool.

This summer, however, a dome of high pressure over the continental west has dominated, causing coastal winds to blow from the south. This pattern has sustained a cap of warm ocean waters from San Diego to Santa Barbara, preventing cool water from rising up.

Warm water for beachgoers and for nearshore ecosystems is not the only consequence of the high-pressure system. “This pattern is also driving the month-long heat wave suffocating California and it is a major cause of the explosion of Western wildfires,” Patzert said. “The continuing Western drought, July heat waves, explosive fire season, and balmy ocean temperatures are all related.”

A layer of exceptionally warm surface water extended from Point Conception to the Baja California coast. 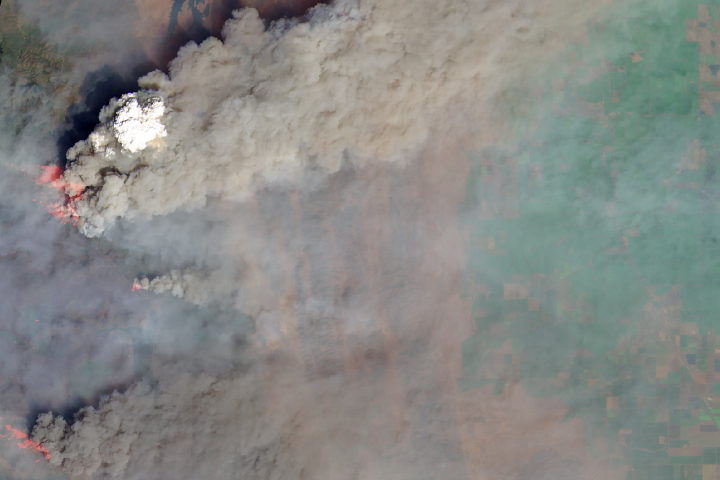