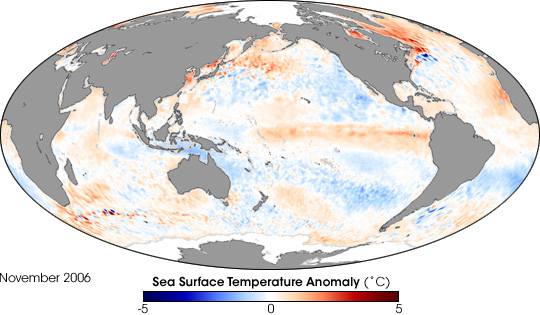 Stretching across nearly a third of the Earth’s surface, the tropical Pacific Ocean soaks up more sunlight than any other single system on Earth. Most of the sunlight is stored in the ocean as heat, but the heat isn't distributed evenly. Winds stir the surface of the ocean, creating pools of warm water and stretches of cool water. In the tropical Pacific, the section of the ocean between 23 degrees North and 23 degrees South, trade winds blow from east to west. The winds push the sun-warmed surface water west, away from the South American coast, to a deep pool of warm water east of Indonesia. Along the South American coast, deep, cold water rises to the surface to replace the warm water being pushed west. As a result, waters in the eastern tropical Pacific are typically cool, while the western tropical Pacific is warm.

Periodically the trade winds will slow or even reverse directions so that warm water is no longer pushed west. The western Pacific cools, while the eastern Pacific warms. This distinctive reversal in the Pacific’s temperature pattern is called El Niño. (The name, Spanish for “boy child,” arose because the pattern often becomes obvious around Christmas.) Satellite measurements of sea surface temperatures in the tropical Pacific revealed a clear El Niño pattern in November 2006. Warmer-than-average sea surface temperatures, shown in red, stretch away from the South American coast, while cooler-than-average temperatures (blue) pool around Indonesia and Australia. The image is based on satellite observations collected in November 2006 by Japan’s Advanced Microwave Scanning Radiometer for the Earth Observing System (AMSR-E) that flies on NASA’s Aqua satellite. Those observations are compared to long-term average conditions observed by the Advanced Very High Resolution Radiometers (AVHRRs) on a series of NOAA (National Oceanic and Atmospheric Administration) satellites that flew between 1985 and 1997.

Though El Niño is a normal climate pattern that develops every 3-7 years, it can cause unusual weather patterns around the globe. In general, El Niño causes higher rainfall in parts of North and South America and drought in western Pacific nations such as Australia and Indonesia. This week, the Earth Observatory will be featuring a series of images that illustrate environmental conditions in Australia that are likely being influenced by El Niño. The images show changes in rainfall patterns and temperatures and the resulting drought and fires in Australia.