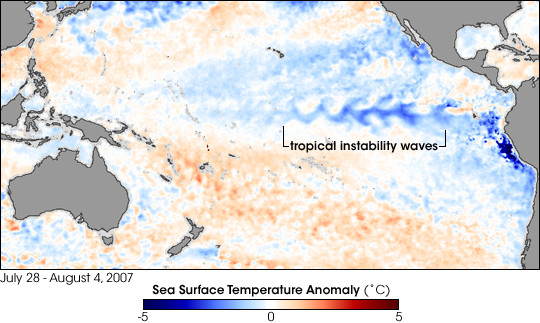 When the easterly trade winds die down and a pool of warm water builds up in the equatorial Pacific Ocean off the coast of South America, the phenomenon is known as an El Niño. When winds strengthen and the water is unusually cool, the phenomenon is known as La Niña. An August 7, 2007, report issued by the National Oceanic and Atmospheric Administration (NOAA) stated that while current conditions in the Pacific were primarily neutral, they were leaning toward a La Niña event, with sea surface temperatures slightly below normal.

This image shows where sea surface temperatures are above (red) or below (blue) the long-term average between July 28 to August 4, 2007. The Advanced Microwave Scanning Radiometer (AMSR-E) flying on NASA’s Aqua satellite collected these observations. Characteristic of La Niña conditions, this image shows a predominance of blue near the South American coast, particularly off the coast of Peru. At the time of the August 7, 2007 prediction, NOAA had derived mixed results from its models, with some models predicting a transition to a mild La Niña over the next couple months, and other models predicting a continuation of neutral conditions.

Daily, 8-day, and monthly sea surface temperature anomaly images like the one pictured above are available from the NASA Earth Observations (NEO) Website.