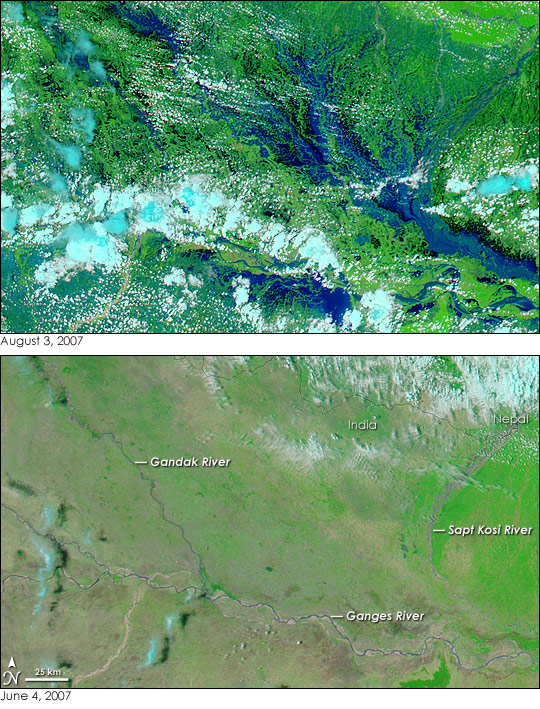 Abutting the southern front of the snow-clad Himalaya Mountains, the broad, flat Ganges Plain is laced with rivers that transport glacial melt to the Bay of Bengal or the Arabian Sea. Not surprisingly, these rivers lead something of a Dr. Jekyll–Mr. Hyde existence: during the dry winter, the rivers are small and sedate, their headwaters largely locked in ice. In the summer, temperatures in the mountains climb, melting mountain-top snow and fueling the Asian monsoon, and the rivers swell into roaring giants.

Not every year is the same however—the monsoon may be wetter in a particular year or winter snows might be greater, leading to more snowmelt—and 2007 numbered among the more extreme flood years. Heavy rain throughout July pushed the Ganges and its many tributaries over their banks, submerging large tracts of land in northeastern India. As of August 3, nearly 20 million people had been displaced in India, Bangladesh, and Nepal, and 125 had died in India, reported BBC News.

Among the most severely hit states was India’s northeastern Bihar state. The Moderate Resolution Imaging Spectroradiometer (MODIS) flying on NASA’s Aqua satellite captured the top image of flooding on the Ganges and its tributaries on August 3, 2007. The lower image, captured by Aqua MODIS on June 4, 2007, shows the plain before the summer monsoon and snowmelt swelled the rivers.

In these images (made with a combination of infrared and visible light), water is black or dark blue. Water takes on a brighter shade of blue when tinged with sediment. Clouds, pale blue and white, are scattered over the flooded region, which is bright green with vegetation. Sparsely vegetated areas or bare earth in the lower image are rose-tinted tan.

On August 3, the Ganges, Gandak, and Kosi Rivers were so swollen that it was hard to see exactly where the rivers normally flow. The tributaries that feed the Kosi River, not even visible on June 4, have combined in a vast web of water-covered land. The light blue area under the clouds in the lower left corner of the image is probably water-soaked earth, not standing water.

Though destructive, seasonal flooding in the Ganges River system blankets the plain with fertile alluvial soil, making it productive farmland. Because the plain is so fertile, it is one of the most densely populated regions on Earth.

Daily images of northeastern India are available from the MODIS Rapid Response System in both false color, as shown here, and photo-like true color.

India's annual monsoon triggered widespread flooding throughout the country in July and August 2007.