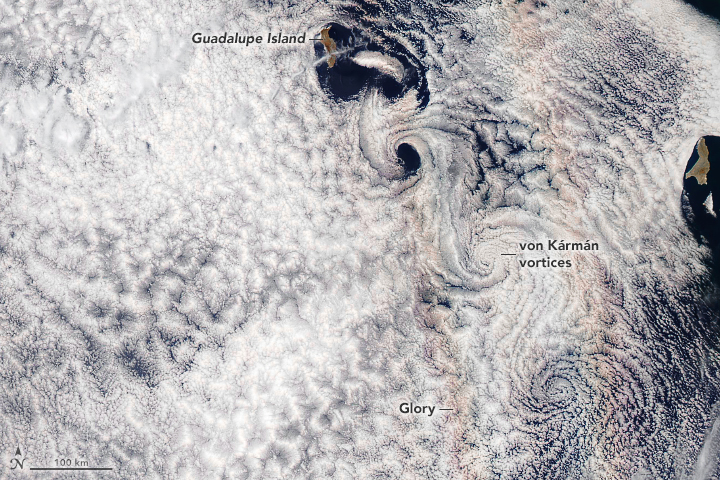 If you have ever seen a series of concentric rings of color near a mist or fog, you have likely seen a glory. This colorful optical phenomenon, bright red on the outside and blue toward the center, forms when water droplets scatter sunlight back toward a source of light.

One of the first scientific reports of a glory came from a French-led expedition to the equator in 1730s. While climbing Mount Pambamarca in the Andes, Pierre Bouguer reported seeing “a cloud that covered us, dissolved itself, and let through the rays of the rising Sun…Then each of us saw his shadow projected upon the cloud. What seemed most remarkable to us was the appearance of a halo or glory around the head, consisting of three or four small concentric circles, very brightly colored, each of them with the same colors as the primary rainbow.” The print below, made by Antonio de Ulloa, a Spanish captain on the same expedition, depicts one of the glories seen on Mount Pambamarca. 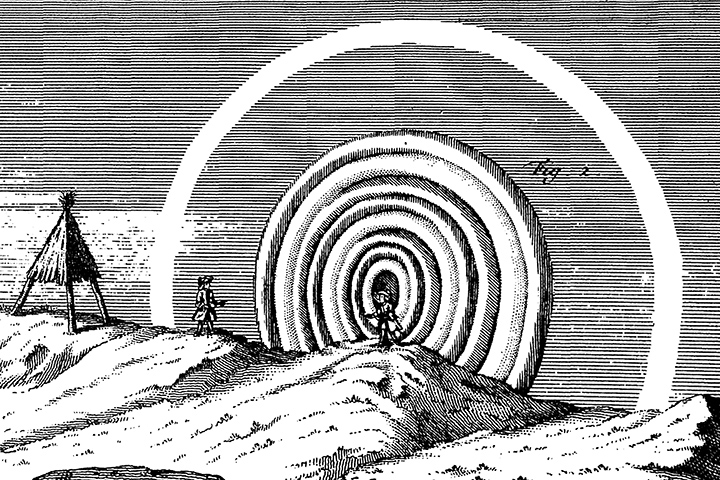 In that era, foggy mountains and steaming geysers or hot springs offered the best opportunities for viewing glories and the accompanying optical phenomena known as brocken spectres. As new technologies emerged, people began to notice glories from other vantage points. In the 19th century, people started to report seeing them from hot air balloons. And in the 20th century, airplanes made glory sightings commonplace.

These days, most people who fly regularly and spend time looking out the window have seen the circular feature around an aircraft’s shadow on the clouds. Astronauts flying on the space shuttles reported seeing circular glories from that look similar to what one might observe from an airplane.

Polar-orbiting satellite sensors, such as the Moderate Resolution Imaging Spectroradiometer (MODIS) on the Terra and Aqua satellites, get a somewhat different view. As MODIS scans Earth’s surface from an altitude of about 700 kilometers (400 miles), it makes swaths perpendicular to the path followed by the satellite. So an individual swath shows a horizontal cross-section through the glory circle, containing two colored areas. As a result, a glory in a natural-color satellite image from MODIS consists of two elongated, colorful bands parallel to the path of the satellite. The MODIS on the Terra satellite acquired this image of a glory near the eastern Pacific island of Guadalupe on June 3, 2018.

Another notable feature in this image are the swirling von Karman vortices visible between the glory. The alternating double row of vortices form in the wake of an obstacle—in this instance Guadalupe—as air masses get disturbed as they pass over this bump in the sea surface. 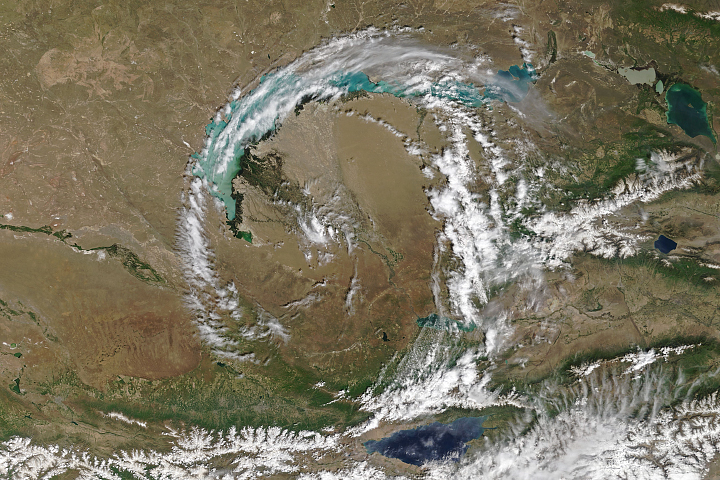 An Eye-Catching Circle of Cloud

Sometimes the atmosphere churns up peculiar-looking cloud formations that are as notable for aesthetic reasons as they are for scientific ones.