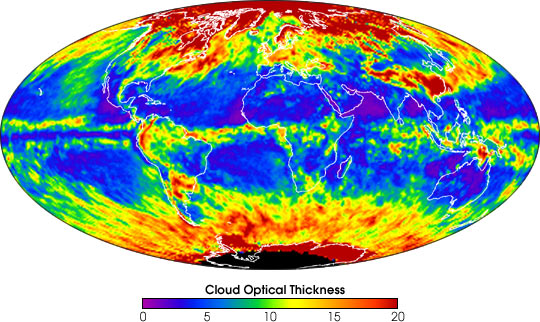 More than just the idle stuff of daydreams, clouds help control the flow of radiant energy around our world. Clouds are plentiful and widespread throughout Earth’s atmosphere—covering up to 75 percent of our planet at any given time—so they play a dominant role in determining how much sunlight reaches the surface, how much sunlight is reflected back into space, how and where warmth is spread around the globe, and how much heat escapes from the surface and atmosphere back into space. Clouds are also highly variable. Clouds’ myriad variations through time and space make them one of the greatest areas of uncertainty in scientists’ understanding and predictions of climate change. In short, they play a central role in our world’s climate system.

The false-color image above shows a one-month composite of cloud optical thickness measured by the Moderate-resolution Imaging Spectroradiometer (MODIS) and averaged globally for April 2001. Optical thickness is a measure of how much solar radiation is not allowed to travel through a column of atmosphere. Areas colored red and yellow indicate very cloudy skies, on average, while areas colored green and light blue show moderately cloudy skies. Dark blue regions show where there is little or no cloud cover. This data product is an important new tool for helping scientists understand the roles clouds play in our global climate system.

MODIS gives scientists new capabilities for measuring the structure and composition of clouds. MODIS observes the entire Earth almost every day in 36 spectral bands ranging from visible to thermal infrared wavelengths, enabling it to quantify a wide suite of clouds’ physical and radiative properties. Specifically, MODIS can determine whether a cloud is composed of ice or water particles (or some combination of the two), it can measure the effective radius of the particles within a cloud, it can determine the temperature and altitude of cloud tops, and it can observe how much sunlight passes through a cloud.

MODIS is one of five sensors flying aboard NASA's Terra satellite, the flagship in NASA's Earth Observing System, launched in December 1999. For more information about this and other new MODIS products, read NASA Unveils Spectacular Suite of New Global Data Products from MODIS.