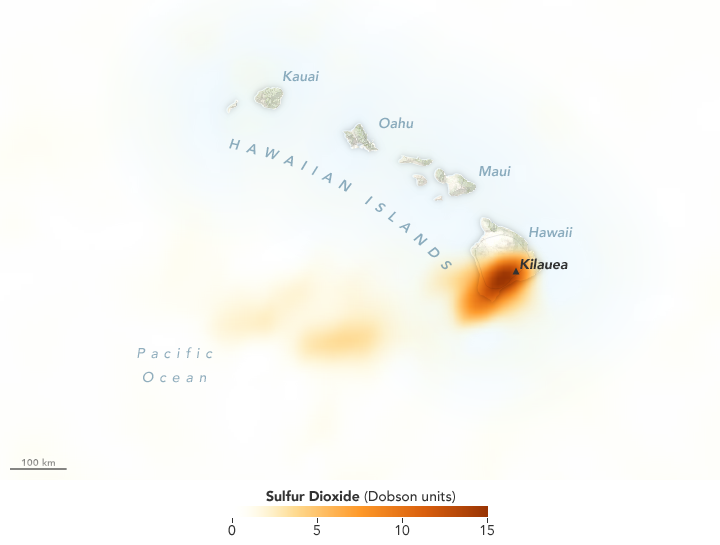 On May 3, 2018, ash, lava, and gas erupted from Hawaii’s Kilauea volcano. Clouds have so far prevented NASA satellites from acquiring a natural-color image of the area. However, the plume contained sulfur dioxide (SO2), a gas that was detected by the Ozone Mapper Profiler Suite (OMPS) on the Suomi-NPP satellite.

The map above shows concentrations of SO2 as detected by OMPS at 1:30 p.m. local time (23:30 Universal Time) on May 3. Maximum gas concentrations reached 15 Dobson Units.

Sulfur dioxide is invisible to our eyes, but it can affect human health and Earth’s climate. The gas reacts with water vapor in the atmosphere to produce acid rain. It also can react with other gases to form aerosol particles that cause haze and, in extreme events, climate cooling.

According to the USGS Hawaiian Volcano Observatory, activity that continued on May 4 was primarily “lava spattering” from at least three small fissure vents in the Leilani Estates subdivision. News reports note that residents of the subdivision were ordered to evacuate.