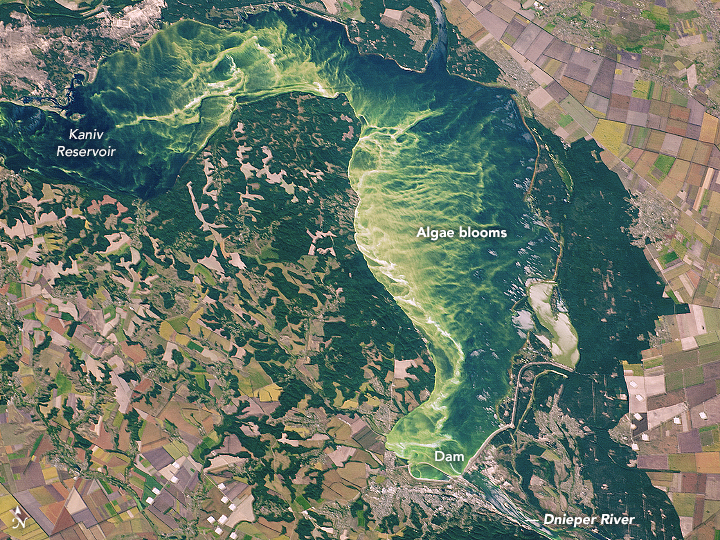 While flying over eastern Europe, an astronaut aboard the International Space Station took this photograph of Kaniv Reservoir on the Dnieper River, approximately 72 kilometers (45 miles) south of Kiev, Ukraine. Neon green algae blooms, young forests that cover old crops, and variegated patches of agriculture—each of these unique features of the landscape are connected through history and its consequences.

In the early 1920s, a policy known as “collectivization” was adopted by the Soviet Union. For Ukrainians, the agricultural policy meant that most farming took place in kolkhozes (collective farms), with a large percentage of harvests being sent to urban centers. After the fall of the Soviet Union in 1991, land in Ukraine was divided into small sections among the rural population, with each plot representing a former kolkhoz farmer.

Today agriculture is still a major part of the Ukrainian economy, with more than 70 percent of the country’s land area devoted to husbandry. Most of the agricultural plots are still used for growing crops, though some are fallow or abandoned and some overgrown with young forests. As a consequence of the pervasive agricultural land use, an abundance of fertilizer runs off into the nearby rivers and reservoirs, leading to phytoplankton (often algae) blooms. The algae seen here, and the nutrients they consume, also travel down the Dnieper River and its tributaries to the Black Sea, where larger phytoplankton blooms can occur.

Astronaut photograph ISS048-E-67483 was acquired on August 26, 2016, with a Nikon D4 digital camera using an 290 millimeter lens, and is provided by the ISS Crew Earth Observations Facility and the Earth Science and Remote Sensing Unit, Johnson Space Center. The image was taken by a member of the Expedition 48 crew. The image has been cropped and enhanced to improve contrast, and lens artifacts have been removed. The International Space Station Program supports the laboratory as part of the ISS National Lab to help astronauts take pictures of Earth that will be of the greatest value to scientists and the public, and to make those images freely available on the Internet. Additional images taken by astronauts and cosmonauts can be viewed at the NASA/JSC Gateway to Astronaut Photography of Earth. Caption by Andi Hollier, Hx5, JETS Contract at NASA-JSC.

More than 70 percent of the country’s land area is farmed or grazed. 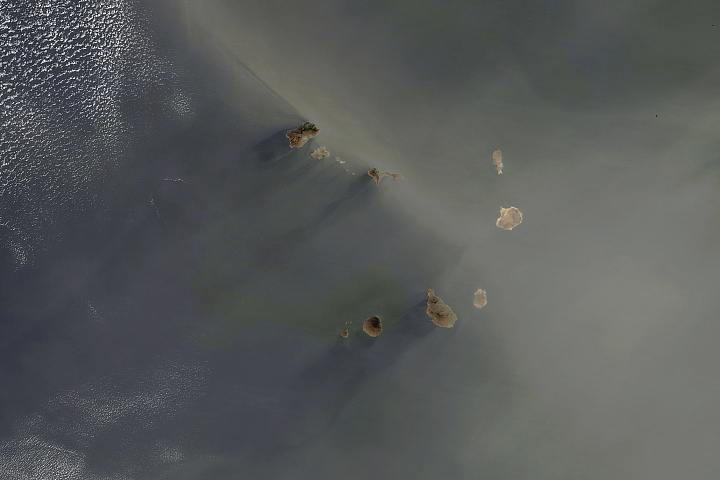 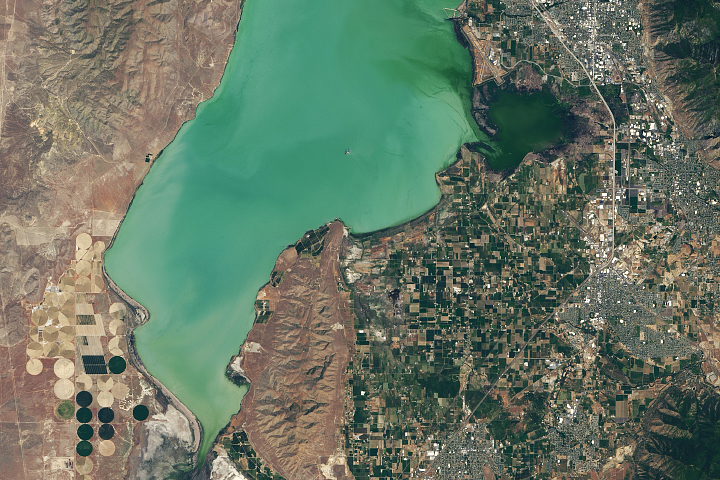