How Algorithm Got Its Name 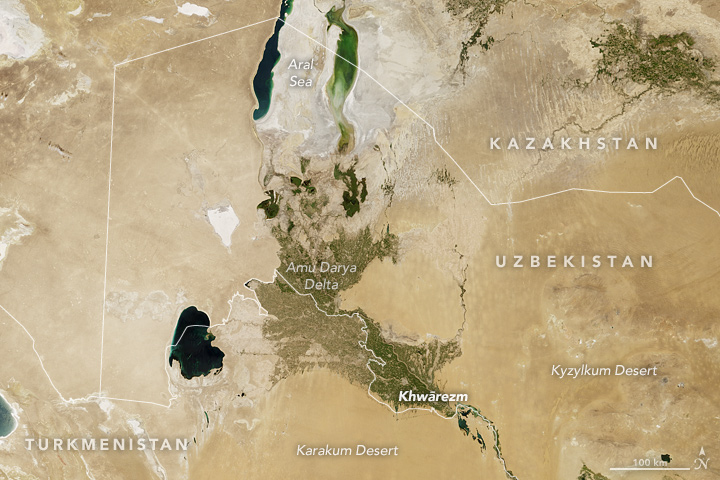 If you walk the halls of NASA’s research facilities, you will likely overhear scientists talking about algorithms—the detailed, often repetitive sequences of rules used in mathematical calculations or other problems. While algorithms are used in other contexts, they are most widely used in computer programming.

Almost all of the 2,400 earth science data products distributed by NASA—from precipitation products produced by the Global Precipitation Measurement (GPM) mission to aerosol products from the Moderate Resolution Imaging Spectroradiometer (MODIS)—are dependent on sets of algorithms that help transform raw observations into data products that are useful to scientists.

The concept of an algorithm has a long history that involves the invention of numerals, mathematics, and computers. The word itself has an interesting origin story that traces back to Khwãrezm (which has several variant spellings), an oasis region in Central Asia along the Amu Darya. With its easy access to water in an otherwise arid region, this area near the Aral Sea was once the seat of influential civilizations ruled by Persian and Central Asian ethnic groups.

On August 20, 2017, the Moderate Resolution Imaging Spectroradiometer (MODIS) on NASA’s Terra satellite captured this image of present-day Khwãrezm, which sits along the borders of Turkmenistan and Uzbekistan. Though the region is arid, the Amu Darya provides enough water to irrigate large swaths of the desert—even as it has caused the Aral Sea to shrink.

One of Khwãrezm’s most famous residents was Muhammad ibn Mūsa al-Khwarizmī, an influential 9th century scholar, astronomer, geographer, and mathematician known especially for his contributions to the study of algebra. Indeed, the latinization of his name, which meant ‘the native of Khwãrezm’ in Persian, gave English the word algorithm. He wrote a book in Arabic about Hindu-Arabic numerals; the Latin translation of the book title was Algoritmi de numero Indorum (in English Al-Khwarizmi on the Hindu Art of Reckoning).

The Latin algoritmi became algorithm in English, leaving us with a word now used to describe everything from the way Google searches the Web to how Facebook determines what articles appear in a news feed.

The latinization of the name of an ancient scholar from Khwārezm in Central Asia gave English the word.