For the fourth day in a row, intense wildfires are menacing communities in Southern California.

On December 8, 2017, thousands of firefighters battled blazes in and around the Los Angeles metropolitan area. The largest, the Thomas fire in Ventura County, had consumed 132,000 acres (53,000 hectares or 200 square miles). Meanwhile, the smaller Rye, Skirball, and Creek fires in Los Angeles County had together charred roughly 20,000 acres. More than 100,000 Californians had evacuated their homes, and at least 400 structures were destroyed.

Fierce Santa Ana winds and unusually dry air made the fires particularly difficult to contain. In the animation above, see how quickly the front of the Thomas fire spread outward between December 4 and December 8. The imagery was acquired with the “day night band” of the Suomi NPP satellite. NPP’s Visible Infrared Imaging Radiometer Suite (VIIRS) detects light in a range of wavelengths from green to near-infrared and uses filtering techniques to observe signals such as city lights, auroras, and wildfires. All of the images were captured around 2 a.m. The same sequence of VIIRS images is shown below, but we have zoomed in on the Thomas fire.

Forecasters are warning that the weather will not provide any significant relief soon. The National Weather Service office in Los Angeles has issued red flag warnings for Los Angeles and Ventura Counties through December 10, meaning a combination of high winds, low humidity, and dried-out vegetation will continue to make it easy for wildfires to spread. Meanwhile, a strong ridge of high pressure parked in the upper atmosphere near the Pacific Coast means there is little chance of rain in Southern California in the next 10 days. 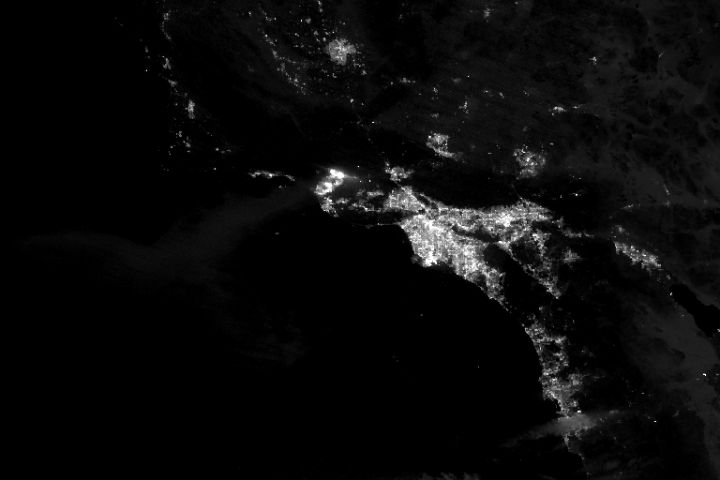