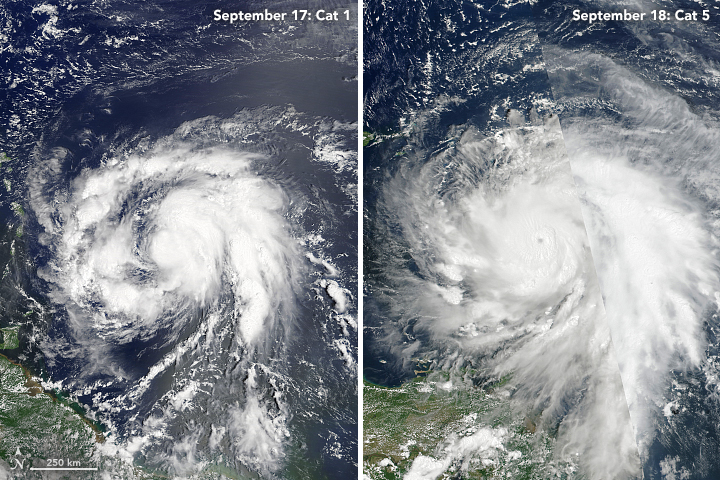 Over the past three decades, the forecasting of a hurricane’s track—the path a storm will take across the ocean and where it will make landfall—has gotten significantly better. However, progress has lagged in accurately forecasting the intensity of a storm’s winds.

Forecasting direction is relatively straightforward because the track is mostly controlled by upper-level “steering winds.” In contrast, how much a storm will intensify is dependent on several factors—some of which are much smaller in scale, more complex, and difficult to represent in forecasting models.

Rapidly intensifying storms—with winds increasing by at least 35 miles per hour (55 kilometers per hour) in a 24-hour period—are particularly problematic. Unexpected strengthening before a storm makes landfall can increase the risk of deaths, injuries, and property damage. In 2017, hurricanes Harvey, Irma, and Maria all underwent rapid intensification. The images above show how Maria developed from a somewhat disorganized tropical storm to a well-organized category 4 hurricane in just 24 hours. The left image was acquired on September 17, 2017, by the Moderate Resolution Imaging Spectroradiometer on NASA’s Terra satellite; the right image was acquired the next day by the Visible Infrared Imaging Radiometer Suite (VIIRS) on Suomi NPP.

Some key ingredients for rapid intensification are high sea surface temperatures, excess ocean heat content (a measure of the water temperature below the surface), and low vertical wind shear. Warm waters go hand-in-hand with warm, humid air, and both provide vital energy and moisture for hurricanes. Vertical wind shear is the difference in the speed and direction of lower level and upper level winds. High shear rips the tops off of developing hurricanes and weakens them, while low shear allows storms to build.

But not all storms undergo rapid intensification when they encounter such conditions. It also takes some smaller-scale and more ephemeral or chaotic features related to the inner core of a storm. Many years of research show that the presence of tall, rotating, convective towers within a storm’s core—sometimes called hot towers or deep convective bursts —play a key role in causing storms to intensify. The features are usually no wider than 10 kilometers (6 miles) and have lifetimes of an hour or less. The small size and ephemeral nature of hot towers makes them a challenge to observe with satellites.

To get a better look at the fine-scale features of storms, NASA has sent aircraft into and over hurricanes in the Genesis and Rapid Intensification Processes (GRIP), the Hurricane and Severe Storm Sentinel (HS3), and the Global Hawk, a cutting-edge aircraft capable of flying for 28 hours without refueling, was part of all of these campaigns. The research drone made extended observations of hot towers and other fine-scale features with a Doppler radar system called the High-Altitude Imaging Wind and Rain Airborne Profiler (HIWRAP). Other NASA aircraft such as the DC-8 and WB-57 also collected important data about the inner workings of storms and the environmental conditions surrounding them.

Between 2010 and 2017, NASA aircraft and their instrument teams sampled at least 18 named storms and launched hundreds of GPS-enabled dropsondes into their powerful winds. Three of these storms—Karl in 2010, Earl in 2014, and Harvey in 2017—underwent rapid intensification. Edouard in 2014 just missed meeting the criteria, but the same intensification processes were at work.

Navigating the Global Hawk over the inner-core features of intensifying storms proved challenging because of turbulence, but NASA teams did make several key observations during their investigations of Karl and Edouard. For Karl, in particular, the HIWRAP got an unprecedented view of how convective bursts form.

“Bursts need to occur inside, not outside, the radius of maximum wind in sufficient numbers for rapid intensification.” said Scott Braun, the principal investigator for the HS3 campaign. The flights also led to a new hypothesis: that a certain part of a storm’s inner core has to become sufficiently humid before rapid intensification can occur. While such details may seem minor, it is the accumulation of granular details like this that will eventually lead meteorologists to build better computer models of how storms work.

The flights also underscored the need for good field data. Predictive models tend to work best when they have accurate information about each storm's specific conditions. “While NASA’s Global Hawk hurricane campaigns have wrapped up for now, it is critical that aircraft continue to fly hurricanes to get environmental data from the front of developing storms,” said Amber Emory, the principal investigator for EPOCH. “It is the best way to ensure that we make progress on improving hurricane intensity forecasts.”