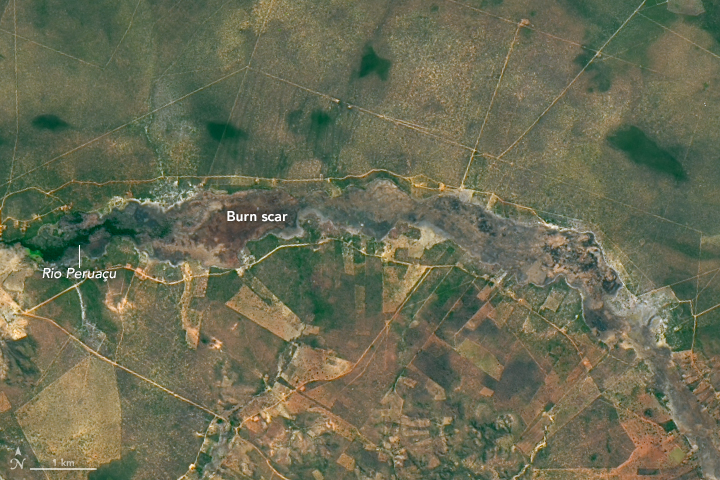 On January 17, 2017, a fire lit by a farmer in a swampy area along the Peruaçu River burned out of control and moved into the Peruaçu Environmental Preservation Area, a national park in the state of Minas Gerais, Brazil. From there, it proceeded to burn amidst grass, bushes, and palm trees (Mauritia flexuosa) for the past eight months.

Rather than producing big, orange flames and billowing plumes of smoke, this fire smoldered underground in dried out, carbon-rich soil and likely peat. In this part of the world, swampy soils near rivers are often drained to make them more suitable for growing crops. On August 11, 2017, the Operational Land Imager (OLI) on Landsat 8 captured this image of the charred landscape (gray) that the fire left behind.

“The fire spread slowly through soil and roots without any visible flames, but it was able to move up the hollow trunks of the Mauritia flexuosa and jump to the palm tree canopy,” explained Jose Eugenio Cortes Figueira, a biologist at the Federal University of Minas Gerais who has been monitoring the fire.

In mid-August 2017, the burn scar was still smoldering and hundreds of palm trees had toppled over. The photograph below, taken by Figueira, shows smoke seeping from the ground with several downed palm trunks behind it. As of mid-August, the fire had burned roughly 600 hectares (2 square miles) of palm swamp along the river—in roughly the same area that had burned during a similar fire in 2014. 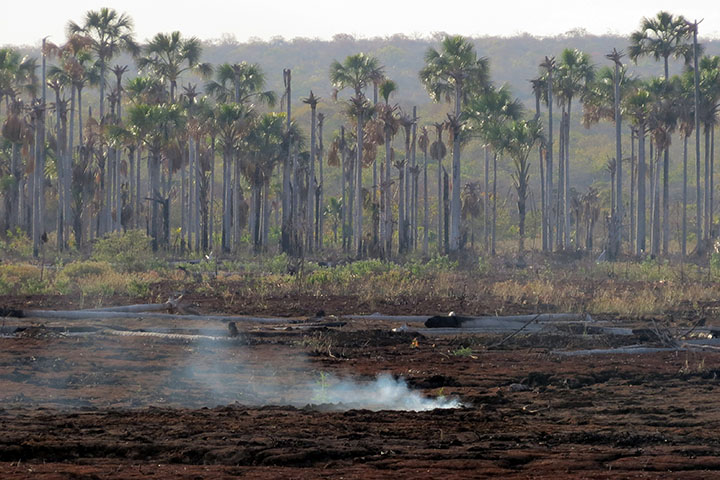 “Peats and swamps are very common in the cerrado of the Espinhaço mountains of eastern Brazil,” he said. “But they are quite understudied, particularly palm swamp fires. I would say that this topic is terra incognita.”

A smoldering fire that burned through soil underground and up hollow palm trunks left this distinctive burn scar along the Peruaçu River.