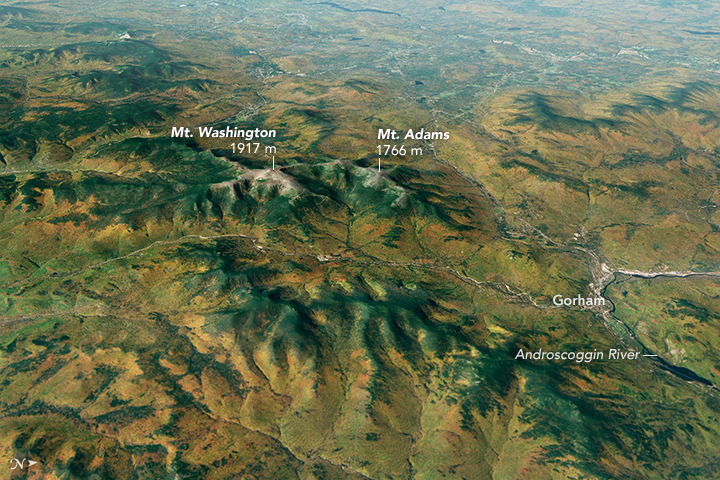 Summer and fall generally bring the clearest skies of the year to the Presidential Range, the highest peaks in New England. Clouds were certainly scarce on October 3, 2014, when the Operational Land Imager (OLI) on Landsat 8 collected the data that was used in this three-dimensional image.

For much of the rest of the year, weather tends to be foul at the summit of Mount Washington (1,917 meters/6,288 feet), Mount Adams (1,766 m/5,793 ft), and the other tall peaks of New Hampshire. Indeed, the Mount Washington Observatory—a manned meteorological station at the summit that has operated since 1932—measures what some have argued is the “world’s worst weather.”

While some people might quibble with that characterization, it is undeniable that the combination of cold, windy, cloudy, and wet conditions make Mount Washington’s weather exceptionally extreme for a peak that is so accessible. Subzero temperatures, hurricane-force winds, and white-outs are common at the summit because the mountain sits in the path of two major storm tracks—one that brings storms from the west and a second that brings them up the Atlantic Coast. In 1934, an observer at the summit recorded a wind gust of 231 miles (372 kilometers) per hour—a world record that held for nearly 62 years. While that record fell in 1996, the mountain continues to be known as a place where extreme conditions rival those of peaks three of four times its height.

Even for a day that was balmy by Mount Washington standards, evidence of fierce weather is visible in the vegetation structure shown in this image. While autumn weather had turned the hardwood forests of the valleys yellow and orange, the upper slopes are populated by conifers (especially spruce and fir) that stay green all year. The summits of the highest peaks are treeless due to the cold weather they face all year. All that manages to eke out a living at the highest elevations are dwarf shrubs, sedges, grasses, rushes, mosses, liverworts, and lichens.

These Landsat data have been overlaid on a digital elevation model created with data from the Advanced Spaceborne Thermal Emission and Reflection Radiometer (ASTER) instrument on NASA’s Terra satellite. The model gives a three-dimensional sense of the landscape. 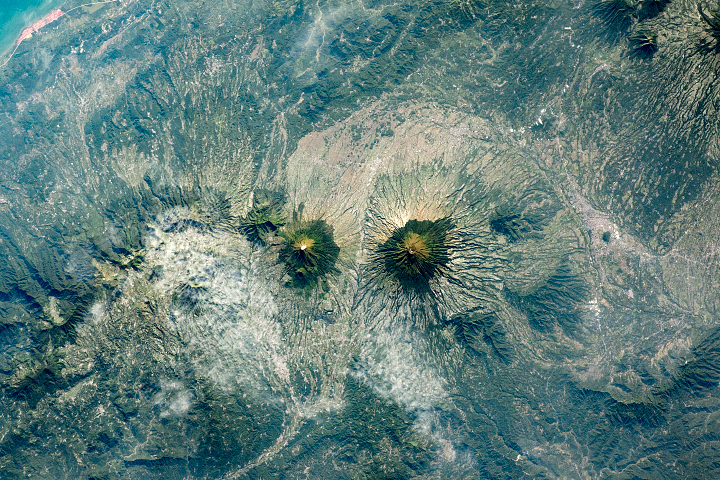