Satellites can already detect wildfires at nighttime, assuming skies are mostly clear and the fire is large enough. But scientists have now found a way to detect nighttime fires even sooner, when they are still relatively small.

University, Navy, and NASA researchers demonstrated the improvement in nighttime fire detection by re-examining an historic wildfire that burned in California’s Sierra Nevada near Yosemite National Park. During the summer of 2013, the Rim fire scorched 1,041 square kilometers (402 square miles), the third-largest fire in the state’s history.

Satellites captured images throughout the course of the fire’s two-month lifespan, such as this nighttime image and this daytime image from August 2013. Images acquired during and after a fire are important for assessing its impact on the land and atmosphere. For the same reasons, it’s also important to know as soon as possible that a fire has ignited.

“If we see the first light of a fire earlier, then firefighters might be able to extinguish it when it is still very small before it gets out of hand,” said Jun Wang, a professor at the University of Iowa and co-author of a research paper describing the new method.

The standard way to detect fires with satellite data from the Visible Infrared Imaging Radiometer Suite (VIIRS) on the Suomi NPP satellite depends on measurements of the heat released or infrared radiation from the fires. The data are processed through a series of steps—an algorithm—called the Active Fire Application Related Product (AFARP), which determines if the information in a pixel can be attributed to a fire. As the animation (top-left) shows, the method worked well in capturing the progression of the Rim fire. Pixels represent the location of a confirmed fire detection.

But the standard method has its challenges. Radiation from the land surface and atmosphere interfere with the infrared radiation from the fires. “So, to detect infrared emissions from fires, the fires have to be sufficiently big,” Wang said. 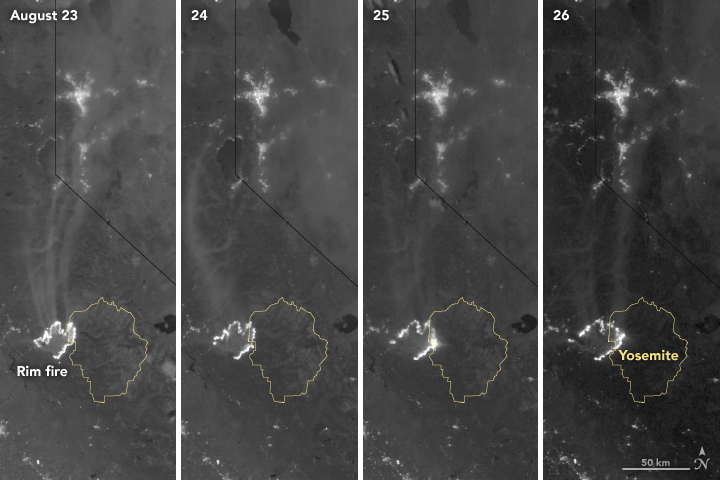 A new algorithm—the Firelight Detection Algorithm (FILDA)—takes advantage of the fire’s light that is visible at night. This visible light is detected in high resolution by the VIIRS “day-night band.” For example, the second image shows the nighttime view of the Rim fire acquired by VIIRS from August 23 through August 26, 2013. By combining both infrared and visible light information, FILDA can detect up to 90 percent more fire pixels than AFARP, and better characterize the fires in terms of flaming (more light) or smoldering (less light).

The animation (top-right) shows that indeed, FILDA detected more fire pixels throughout the duration of the Rim fire. The extra detail allowed scientists to retrospectively detect the fire at 2:43 a.m. Pacific Daylight Time on August 18, 2013. That’s just 11 hours after ignition, and one day sooner than the standard method found the fire.

The success with the Rim fire is a solid start toward making the algorithm ready to be used by fire managers and scientists. Now, Jun says that he and colleagues want to continue to refine the algorithm by looking at past fire events around the world.

Appears in these Collections:
Earth at Night
U.S. National Parks 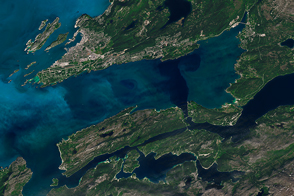