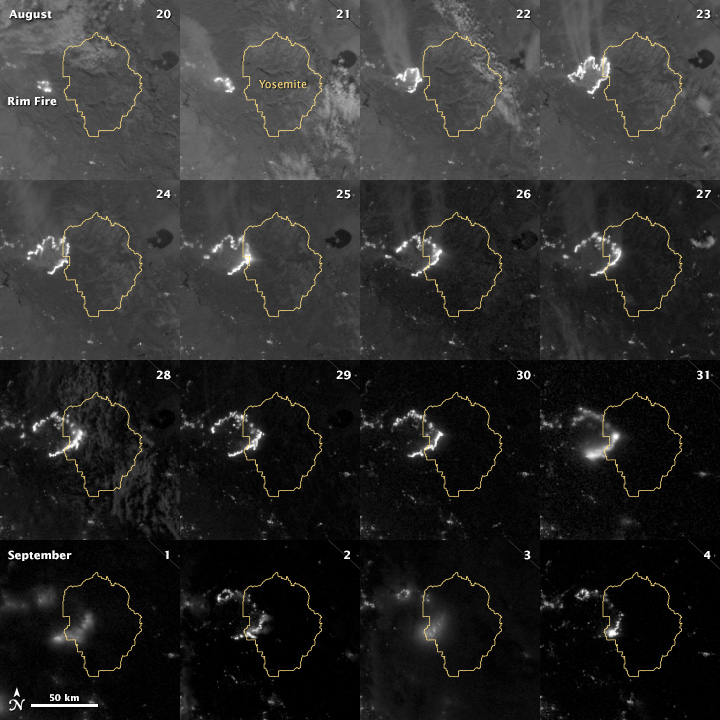 The winter of 2012–2013 was among the driest on record for California, setting the stage for an active fire season. By September 6, 2013, the Rim Fire had made its way into the record books. Eighty percent contained, the fire was the third largest in California since records began in 1932.

The Visible Infrared Imaging Radiometer Suite (VIIRS) on the Suomi NPP satellite tracked the growth of the fire between August 20 and September 4. The VIIRS day-night band is extremely sensitive to low light, making it possible to see the fire front from space at night. The brightest, most intense parts of the fire glow white. Pale gray smoke streams away, generally to the north. Thin clouds obscured the view on some days, particularly August 31, September 1, and September 3. On August 20, the Moon was full, so the landscape was reflecting a large amount of moonlight. The background grew progressively darker as the September 5 new moon approached.

The perimeter of the fire changed along different fronts from day to day, depending on winds and firefighting efforts. On August 24, firefighters focused on containing the western edge of the fire to prevent it from burning into Tuolumne City and the populated Highway 108 corridor. They also fought the eastern edge of the fire to protect Yosemite National Park. These efforts are evident in the images: Between August 23 and 24, the eastern edge held steady, the western edge receded, and the fire grew in the southeast.

On the morning of August 25, 2013, fire managers reported that the blaze was growing in the north and east. With the fire burning aggressively and moving east into Yosemite, August 26 and 27 proved challenging days for firefighters. But over the next few days, they began to gain control after a series of burnout operations along the fire’s northern and eastern edges. On August 29, the evacuation advisory for Tuolumne City was lifted. The southeastern flank continued to burn intensely in the first week of September, but officials expect the blaze will be 100 percent contained by September 20.

NASA Earth Observatory image by Jesse Allen and Robert Simmon, using VIIRS day-night band data from the Suomi National Polar-orbiting Partnership. Suomi NPP is the result of a partnership between NASA, the National Oceanic and Atmospheric Administration, and the Department of Defense. Caption by Holli Riebeek and Adam Voiland.