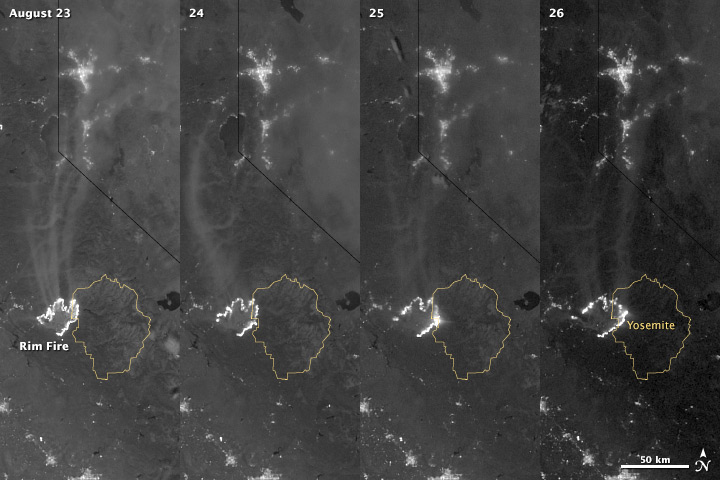 The winter of 2013 was among the driest on record for California, setting the stage for an active fire season. By August 26, the Rim Fire had made its way into the record books. At just 15 percent contained, the fire is now the 13th largest in California since records began in 1932. The fire is also threatening one of the United States’ greatest natural treasures: Yosemite National Park.

The Visible Infrared Imaging Radiometer Suite (VIIRS) on the Suomi NPP satellite tracked the growth of the fire between August 23–26. The VIIRS day-night band is extremely sensitive to low light, making it possible to see the fire front from space at night. The brightest, most intense parts of the fire glow white, exceeding the brightness of the lights of Reno, Nevada, to the north. Pale gray smoke streams away from the fire, generally to the north.

On the morning of August 25 fire managers reported that the blaze was growing in the north and east. In the image, the most intense activity is just inside Yosemite National Park.

Firefighters reported that the Rim Fire continued to be extremely active on its eastern front on the morning of August 26, and this activity is visible in the image. By 8:00 a.m., the fire had burned 149,780 acres and forced firefighters in Yosemite National Park to take measures to protect the Merced and Tuolumne Groves of Giant Sequoias. However, the National Park Service reported that the trees were not in imminent danger. While parts of Yosemite National Park are closed, webcams show that most of the park has not been affected.

The Rim Fire started on the afternoon of August 17, 2013. It has destroyed 23 structures and threatened 4,500 other buildings. The cause is under investigation. 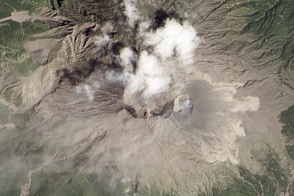