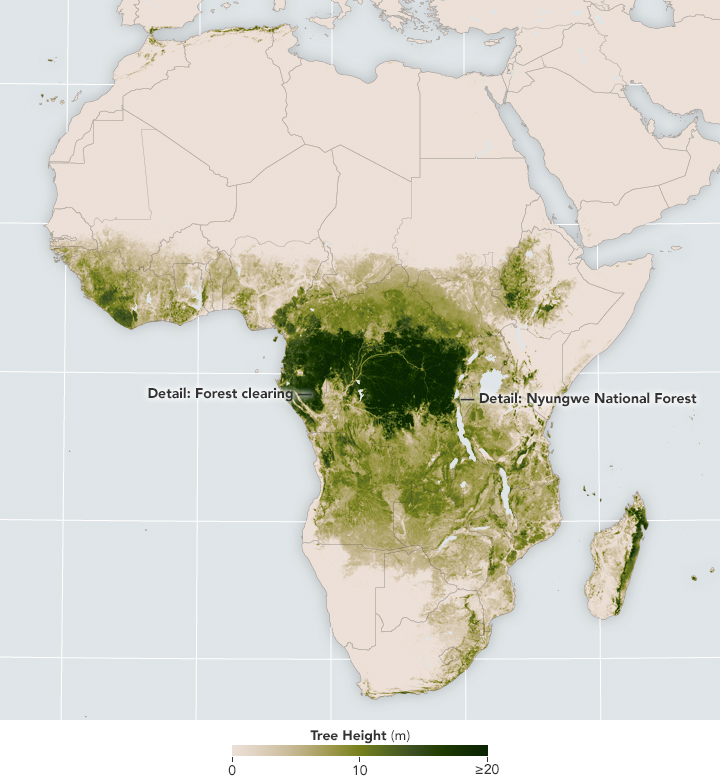 In Rwanda’s Nyungwe Forest National Park, the trees grow tall. Old hardwood trees—such as mahogany and ebony—tower over the forest floor. But just beyond the park borders, the vegetation is markedly less robust.

Along the equator in Africa, dense rainforests are the “green heart” of an otherwise dry continent. Yet, in some places, human activity has cut into this verdant core—a fact that can be derived from measurements of tree height.

In a November 2016 paper published in Remote Sensing of Environment, researchers described how they created a continent-scale view of African forests by cross-referencing data from and computer models and several satellites, including IceSat, Landsat 8, and Landsat 7. The map above was derived from that analysis. It depicts areas with tall canopies—particularly the thick band of tropical rainforest across equatorial Africa—as well as areas with little or no tall growth.

Matthew Hansen, a lead author of the study and researcher at the University of Maryland, called the work “exciting” because there is not much tree height data for that part of the world. The new analysis gives forest ecologists a more accurate picture of a landscape undergoing frequent change, especially from small-holder agriculture.

Years ago as a volunteer for the Peace Corps, Hansen saw African forests firsthand. The rainforest, he said, had distinct boundaries, with tall, dense stands of trees abutting areas of low-lying shrubbery or human villages and settlements. “When you walk up to the rainforest in Congo, it’s a wall and there’s no smooth transition.”

This distinction is also apparent in the new satellite data. Zoomed-in portions of the map (below) highlight places where there are stark contrasts in tree cover. 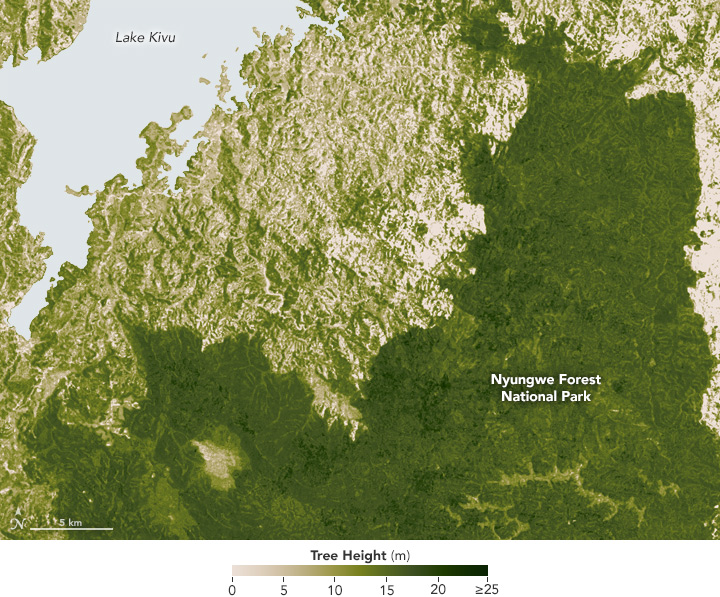 The image above shows the area around Nyungwe Forest National Park; the protected forest stands out as a deep green due to the many taller, older trees. Located between the Nile and Congo river basins, Nyungwe receives 70 percent of Rwanda’s rainfall, according to the International Institute for Sustainable Development. But tall vegetation becomes sparser and shorter beyond the park’s perimeter, a result of intense land use, Hansen said.

Rural though it is, the area is also densely populated, with roughly 460 people per square kilometer. Rwanda’s population has risen markedly in past decades, putting strain on its resources. Activities like farming, logging, and livestock grazing occur within close proximity to—and frequently encroach on—the protected parkland.

In rural Gabon, the lush vegetation tells a similar story. The mean annual rainfall in much of of Western and Central Equatorial Africa, including Gabon, ranges between 150 and 200 centimeters per year. Even the highlands see between 100 and 150 centimeters of rain. This ample water supply promotes biodiversity; that water plus rich soil also attracts farmers. Though Gabon is sparsely populated, with roughly 7 people per square kilometer, it too has seen the effects of deforestation and land use change. 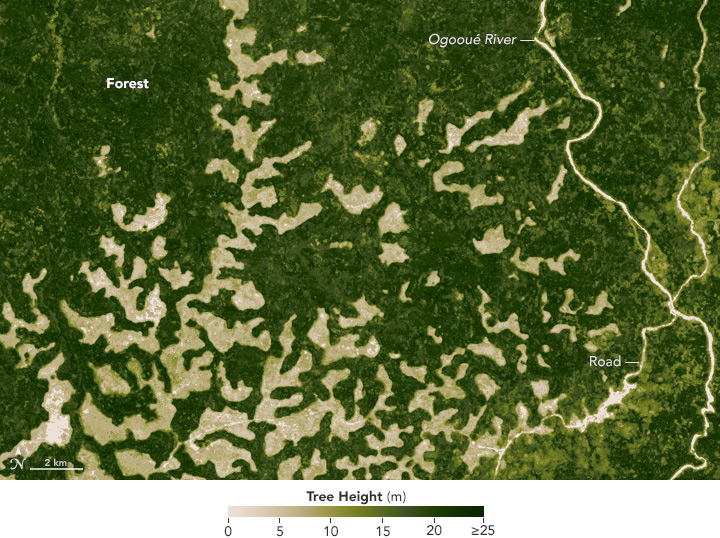 In this image, lighter-toned areas contain shorter or less-developed trees. These areas could be the result of past disturbance, including fire, Hansen said. “Sandy upland soils can lose forests easily,” he said. “Most of the grasslands abutting the rainforest are derived.” (In “derived” or “secondary” grasslands, trees have been removed, leaving behind only a low-growing layer of native vegetation.) Measuring up to several kilometers in length, these patches cut into wooded areas where trees can stand up to 18 meters (nearly 60 feet) tall.