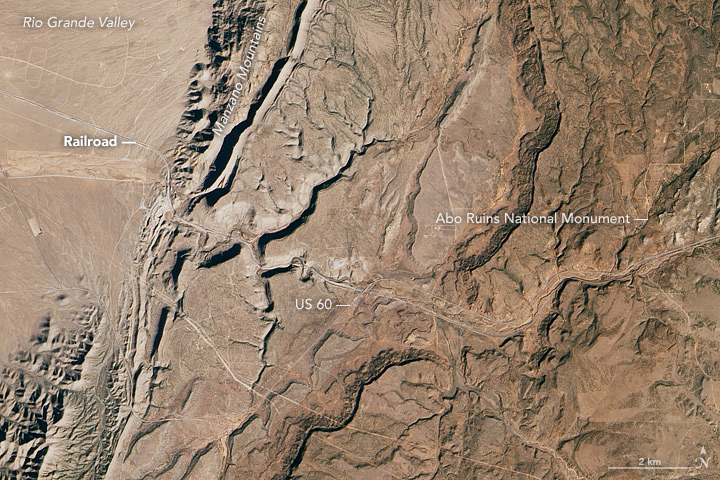 In New Mexico, railroad tracks and roadways tell a story of human travel through a remote area. People have been traversing the desert here for centuries.

“The Southwestern United States was built by tough, daring men who bound her leagues together, first by foot trails and wheel trails in the sod, and then with steel track,” wrote James Marshall in his 1945 book, Santa Fe: The Railroad that Built an Empire, capturing the mythology and ethos of the westward expansion. But long before trains sped across the desert, the area’s Native American inhabitants, the Pueblo people, traveled these lands, trading corn and beans for buffalo meat from their northern neighbors.

The arrival of Spanish Conquistadors created the first Spanish settlement in New Mexico in 1598. The Spanish also established missions, like the one at the Salinas Pueblo Missions National Monument, south of Albuquerque. Trade routes such as the Santa Fe Trail brought cloth and consumer goods into the region and down into Mexico, where they were exchanged for wool, mules, silver, and gold.

The famous outlaw known as Billy the Kid passed through this area, likely on horseback, in the spring of 1880. Around the same time, railroads began to snake across New Mexico. By 1931, the Santa Fe railroad was part of the longest railroad network in the U.S., with 13,568 miles of track. (This stretch of track shown above now belongs to the BNSF Railway, the second-largest freight railway in the United States.)

U.S. Route 60 runs roughly parallel to the existing freight lines. The highway, commissioned in 1926, became the first major road to take motorists speeding across this otherwise remote, dusty patch of land. The curves of the road and neighboring railroad pass a stone’s throw from the Abo Ruins at the Salinas Pueblo Missions National Monument. 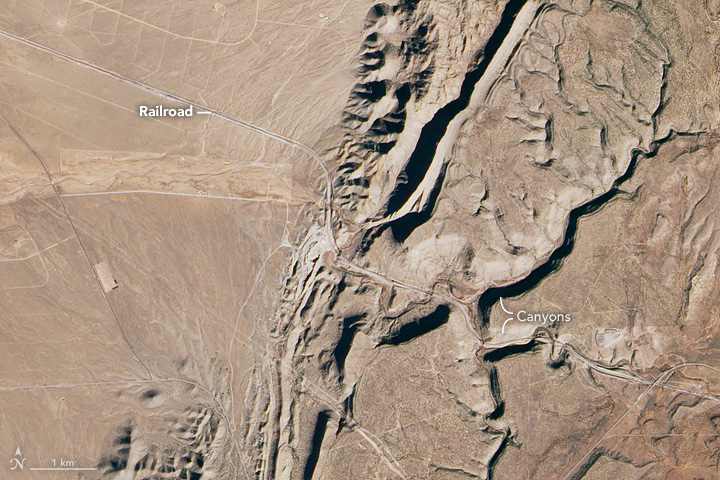 On November 1, 2015, the Advanced Land Imager (ALI) on NASA’s Earth Observing-1 (EO-1) satellite acquired an image of the dusty patch of land where the Manzano Mountains meet the desert grasslands. Canyons cut into the landscape, and some of the fainter lines indicate roads. Shrubs and short trees form a polka-dot pattern across the terrain.

Although the canyons appear to protrude from the landscape, in fact, their deep shadows mark a recession in the Earth. Because these shadows form on the southwest flank of these geologic features, they can cause relief inversion—an optical illusion that causes a gully to resemble a hill, or vice versa.

Although the canyons appear to protrude from the landscape, their deep shadows mark a recession in the Earth.