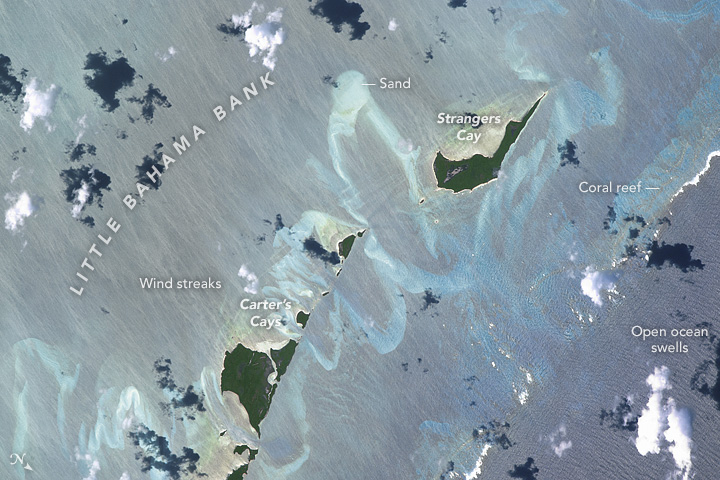 The Bahama Islands are one of the most recognizable places on Earth for astronauts and one of their favorite areas to photograph. The eyes are naturally drawn to the large areas of shallow seas, known as banks, that appear in light blue.

The edge of the Little Bahama Bank in the northern Bahamas is marked by the straight line of a coral reef. White breaking waves appear on the seaward edge of the reef, and the sea floor rapidly deepens north of this line (darker blue on the lower right).

This long-lens view shows all kinds of detail in the shallow water. The brightest swirls are shelly sands molded into sweeping shapes; they give a strong sense of the flow of water moved repeatedly onto and off the bank. The largest sand feature (a U-shape at image center) lies opposite the widest break in the coral reef—where the tidal flow is strongest. A gap in the line of breakers shows the opening.

The small island known as Strangers Cay is 3.6 kilometers (2.25 miles) long, giving some perspective on the large stretches of seafloor affected by the tides on this shallow bank. Other black shapes are the shadows of clouds.

Regular patterns of swells appear in the deeper water (lower right). The quieter, shallow water in the center of the image—protected from the open sea by the reef—was streaked by a brisk northeast wind on the day this photo was taken.

Astronaut photograph ISS049-E-41356 was acquired on October 20, 2016, with a Nikon D4 digital camera using an 1150 millimeter lens, and is provided by the ISS Crew Earth Observations Facility and the Earth Science and Remote Sensing Unit, Johnson Space Center. The image was taken by a member of the Expedition 49 crew. The image has been cropped and enhanced to improve contrast, and lens artifacts have been removed. The International Space Station Program supports the laboratory as part of the ISS National Lab to help astronauts take pictures of Earth that will be of the greatest value to scientists and the public, and to make those images freely available on the Internet. Additional images taken by astronauts and cosmonauts can be viewed at the NASA/JSC Gateway to Astronaut Photography of Earth. Caption by M. Justin Wilkinson, Texas State University, Jacobs Contract at NASA-JSC.

The shallow seas allow us to see vivid details of how waves, winds, and tides shape the islands. 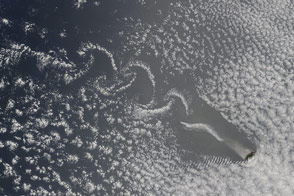 Still Sandy After All These Years

In 2002, Earth Observatory published one of the site’s most popular images: the Great Bahama Bank. Eighteen years later, the science has advanced but the sand has not.