Still Sandy After All These Years 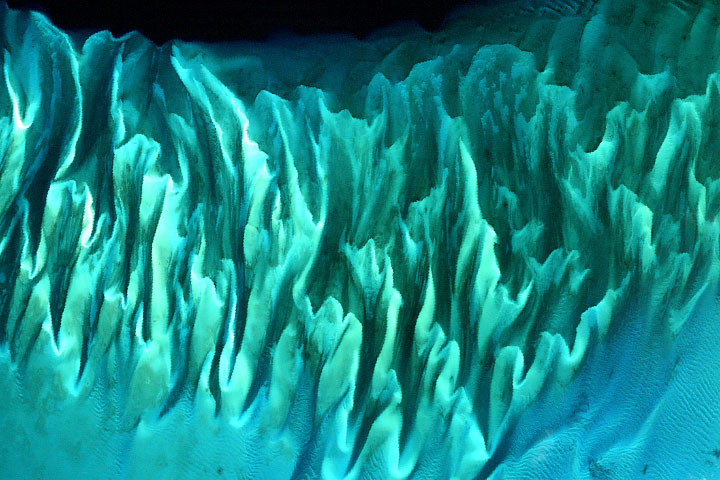 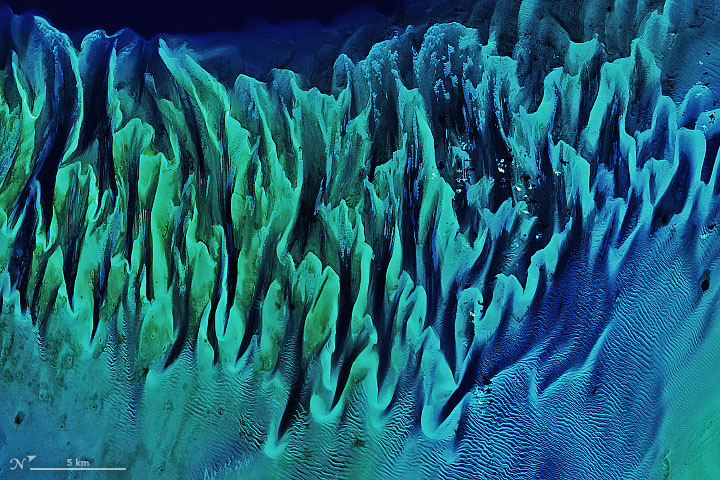 When oceanographer Serge Andréfouet first saw a satellite image of the Great Bahama Bank, he knew the colors and contours were special. He passed the unique image to a colleague, who submitted it to NASA’s Earth Observatory (EO) for an Image of the Day in 2002 (top image). Nearly eighteen years later, the image is still much appreciated. In fact, it knocked off more recent satellite imagery to win EO’s Tournament Earth 2020.

“There are many nice seagrass and sand patterns worldwide, but none like this anywhere on Earth," said Andréfouet, who is now studying reefs at the Institute for Marine Research & Observation in Indonesia. “I am not surprised it is still a favorite, especially for people who see it for the first time.” He said the image has been featured over the years on numerous websites, in books, and even at rave parties.

The varying colors and curves remind us of graceful strokes on a painting, but the features were sculpted by geologic processes and ocean creatures. The Great Bahama Bank was dry land during past ice ages, but it slowly submerged as sea levels rose. Today, the bank is covered by water, though it can be as shallow as two meters (seven feet) deep in places. The bank itself is composed of white carbonate sand and limestone, mainly from the skeletal fragments of corals. The Florida peninsula was built from similar deposits.

Andréfouet’s image (top) shows a small section of the bank as it appeared on January 17, 2001, and was acquired by the Enhanced Thematic Mapper Plus (ETM+) on the Landsat 7 satellite (using bands 1-2-3). At that time the instrument’s blue channel (band 1) helped distinguish shallow water features better than previous satellite mission.

The wave-shaped ripples in the images are sand on the seafloor. The curves follow the slopes of underwater dunes, which were probably shaped by a fairly strong current near the sea bottom. Sand and seagrass are present in different quantities and at different depths, which gives the image a range of blues and greens. The area appeared largely the same when Landsat 8 passed over on February 15, 2020 (second image above). 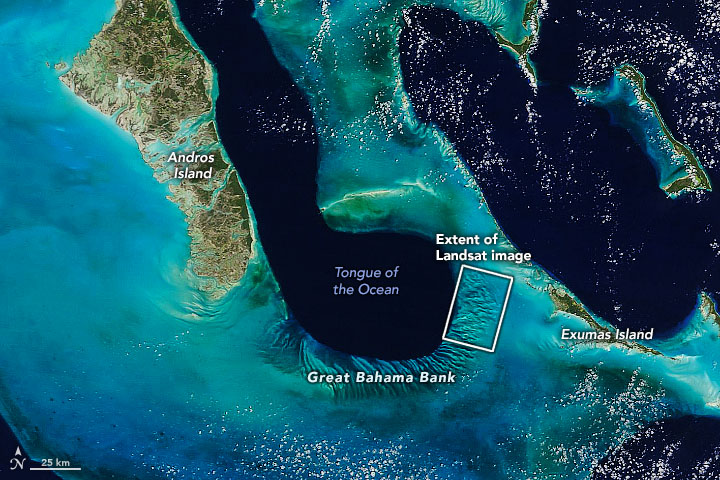 The shallow bank quickly drops off into a deep, dark region known as the “Tongue of the Ocean.” Diving about 2,000 meters (6,500 feet) deep, the Tongue of the Ocean is home to more than 160 fish and coral species. It lies adjacent to the Andros Island, the largest in the Bahamas and one of the largest fringing reefs in the world. The image above was acquired on April 4, 2020, by the Moderate Resolution Imaging Spectroradiometer (MODIS) on NASA’s Terra satellite.

At the time of the 2001 image, researchers did not have a good understanding of the location and distribution of reef systems across the world. Global maps of coral reefs had not changed much since the 19th Century. So researchers turned to satellites for a better view. Andréfouet’s image was collected as part of the NASA-funded Millennium Coral Reef Mapping Project, which aimed to image and map coral reefs worldwide. The project gathered more than 1,700 images with Landsat 7, the first Landsat to take images over coastal waters and the open ocean.

Today, many satellites and research programs continue to map and monitor coral reef systems, and marine scientists have a better idea of where the reefs are and how they are faring. Researchers now use reef images and maps in tandem with sea surface temperature data to identify areas vulnerable to coral bleaching.

In 2002, Earth Observatory published one of the site’s most popular images: the Great Bahama Bank. Eighteen years later, the science has advanced but the sand has not.