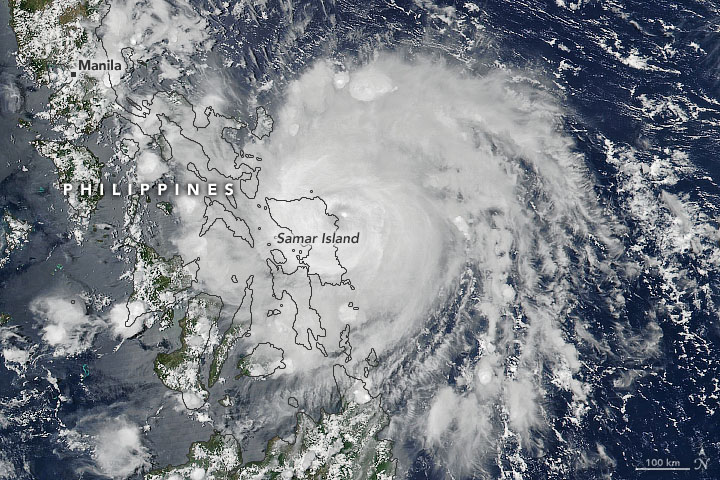 The first tropical storm in the Western Pacific Ocean in 2020 did not form until May 12. By May 14, it was making landfall in the Philippines with fierce winds and heavy rainfall. Civil authorities worked to evacuate tens to hundreds of thousands of people from coastal and mountainous areas prone to flooding and landslides.

Typhoon Vongfong (named Ambo in the Philippines) made landfall in the province of Eastern Samar around noon local time on May 14. Shortly before landfall, the storm had sustained winds of 100 knots (115 miles/185 kilometers per hour), according to the Joint Typhoon Warning Center. The Philippine Atmospheric, Geophysical, and Astronomical Services Administration rated the storm as category 3 on their wind scale. The storm blew into an area that was devastated in 2013 by Typhoon Haiyan.

Just after midday on May 14, the Visible Infrared Imaging Radiometer Suite (VIIRS) on the NOAA-NASA Suomi NPP satellite acquired this natural-color image of Typhoon Vongfong. The storm was predicted to move north-northwest across most of the large Philippine Islands through May 16, including Luzon (the most populated). Some weather models predicted as much as 25 to 50 centimeters (10 to 20 inches) of rainfall in places.

Vongfong is the first named storm of 2020 in the entire Northern Hemisphere. According to Weather Underground and Colorado State University, there are on average (1981-2010) at least two named storms in the Northwest Pacific by May 12 each year.

Hurricane season officially begins in the Eastern Pacific on May 15; the Atlantic hurricane season begins on June 1. There is no real beginning or end to the typhoon season in the Western Pacific, as storms can form at any time of year due to the persistently warm water and a lack of dry air that can suppress storms. However, the peak of storminess usually comes in late summer. 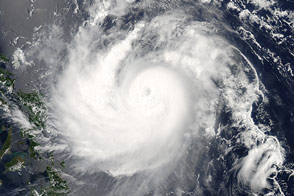 The storm is intensifying, but there are hopes that it might just graze the island of Luzon. Heavy rainfall is expected.