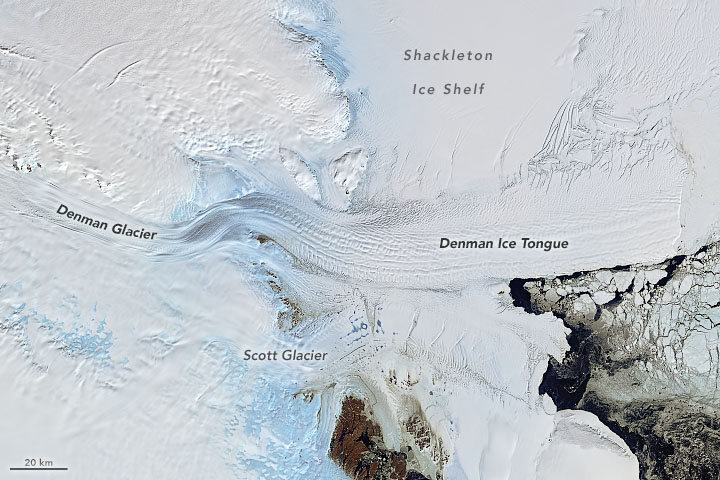 Using a combination of satellite sensors, scientists recently found that Denman Glacier has been retreating both above and below the water line. That one glacier in East Antarctica holds as much ice as half of West Antarctica, so scientists are concerned about its stability.

From 1996 to 2018, the grounding line along the western flank of Denman Glacier retreated 5.4 kilometers (3.4 miles), according to a new study by scientists from NASA’s Jet Propulsion Laboratory and the University of California, Irvine (UCI). The grounding line is the point at which a glacier last touches the seafloor before it begins to float.

The natural-color image at the top of this page is a mosaic of cloud-free images acquired by Landsat 8 on February 26-28, 2020. The map below provides a three-dimensional view of the bed topography—the shape of the land surface and seafloor under the ice—around Denman Glacier, as derived from measurements made by radar and gravity-sensing instruments. The pink line delineates the grounding line as measured in 1996, while yellow indicates the line observed during the new study. (Ice flows from left to right on the map.) The darker the blues, the deeper the seafloor. Note the depth around and behind (left) the grounding line. 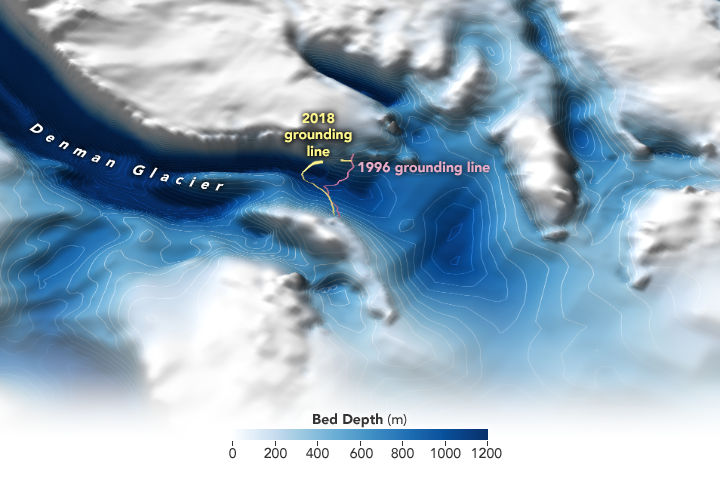 “Because of the shape of the ground beneath Denman’s western side, there is potential for the intrusion of warm water, which would cause rapid and irreversible retreat and contribute to global sea level rise,” said lead author Virginia Brancato, a scientist at JPL, formerly at UCI.

On its eastern flank, Denman Glacier runs into a 10-kilometer (6-mile) wide underwater ridge. On its western flank, however, the glacier sits over an 1800-meter deep trough that stretches well inland. If the grounding line keeps retreating, seawater could get funneled into that trough—which is smooth and slopes inland—and penetrate far into the continent. (The trough eventually dives to 3500 meters below sea level, the deepest land canyon on Earth. Click here to learn more about the Antarctic landscape beneath the ice.)

The scientists are concerned by the changes at Denman’ grounding line because there is potential for the glacier to undergo a rapid and irreversible retreat. As global temperatures rise and atmospheric and ocean circulation changes, warm water is increasingly being pushed against the shores of Antarctica by westerly winds.

“East Antarctica has long been thought to be less threatened, but as glaciers such as Denman have come under closer scrutiny, we are beginning to see evidence of potential marine ice sheet instability in this region,” said Eric Rignot, a cryospheric scientist at JPL and UCI and one of the study authors. “The ice in West Antarctica has been melting faster in recent years, but the sheer size of Denman Glacier means that its potential impact on long-term sea level rise is just as significant.” 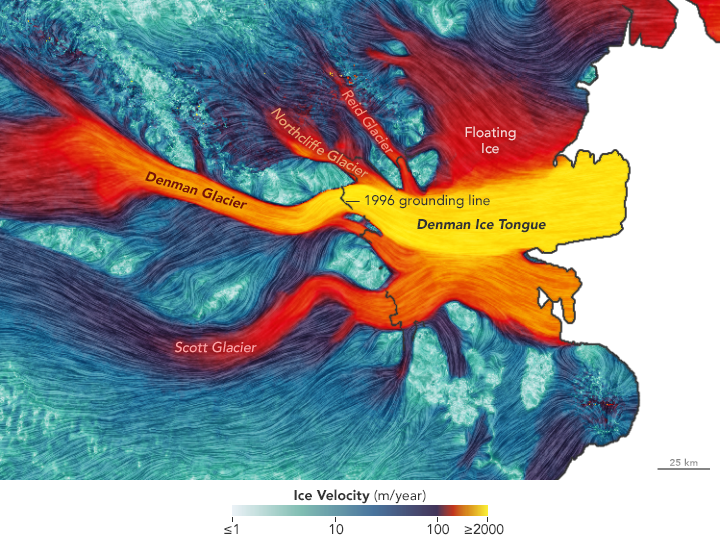 This map depicts the velocity of the ice surfaces on and around Denman Glacier, as measured by the JPL/UCI team. Ice flows from left (grounded ice) to right (floating ice) in the image. About 24,000 square kilometers (9,000 square miles) of Denman floats on the ocean, mostly on the Shackleton Ice Shelf and Denman Ice Tongue. That floating ice has been melting from the bottom up at a rate of about 3 meters (10 feet) annually. These measurements, as well as the grounding line and seafloor measurements above, were made through the use of synthetic aperture radar data from the German Aerospace Center’s TanDEM-X satellite and the Italian COSMO-SkyMed satellites, as well laser altimetry data from NASA’s Operation IceBridge.

Recent research found that Denman Glacier lost roughly 268 gigatons (billion tons) of ice, or 7.0 gigatons per year, between 1979 and 2017. Until recently, researchers believed that East Antarctica was more stable than West Antarctica because eastern glaciers and ice sheets were not losing as much ice as those in the western part of the continent. If all of Denman melted, it would result in about 1.5 meters (5 feet) of sea level rise worldwide.