Cyclonic Storm in the Mediterranean 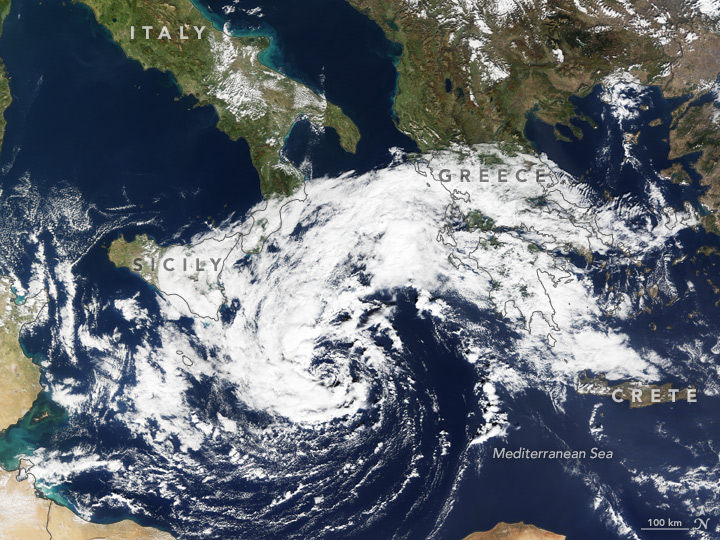 The shape of this storm resembles something you would more often see spinning over the Pacific or Atlantic oceans. This one, however, developed over the Mediterranean Sea.

Soon after this image was acquired, NOAA reported that the system appeared to be a T-number 1.0 storm on the Dvorak Current Intensity Chart. It was generating sustained winds of 47 kilometers (29 miles) per hour, equivalent to a tropical depression on the Saffir-Simpson wind scale. (For comparison, category-1 storms on the Saffir-Simpson scale have sustained winds between 119–153 kilometers per hour.) The storm was strong enough to generate large waves that affected some areas of land. News reports noted that that crews removed 177 tons of debris that washed up on the east coast of Malta.

Cloud patterns in satellite imagery usually show cyclonic circulation before a storm reaches tropical storm intensity. Some of these storms over the Mediterranean have had characteristics similar to hurricanes, earning them the name “Medicanes,” a mash-up of the words “Mediterranean” and “hurricane.”.

An unusual storm dubbed 90M was strong enough to send waves and debris onto the shores of Malta.