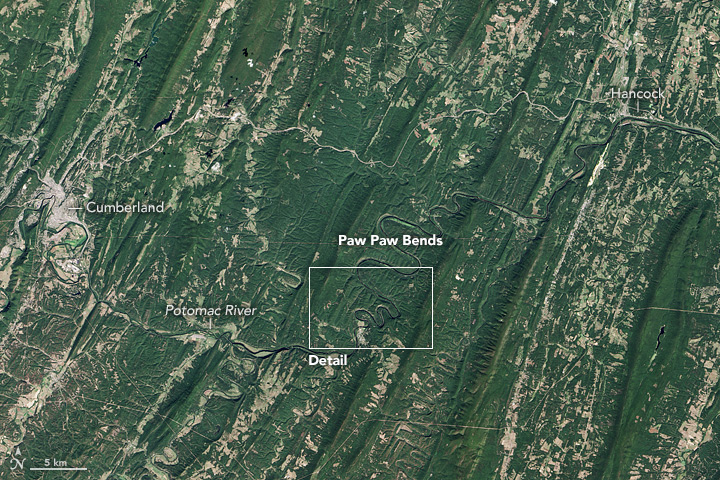 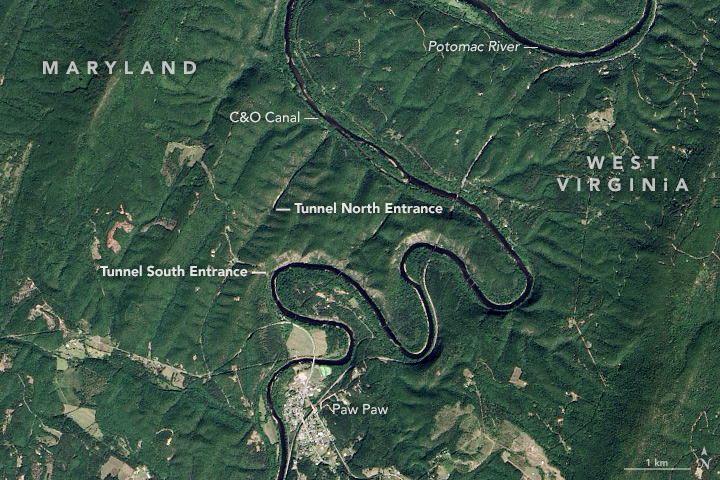 For 297 kilometers (185 miles) from Georgetown in Washington, D.C., to Cumberland, Maryland, the Chesapeake & Ohio Canal generally follows along the north bank of the Potomac River. Constructed over a span of 22 years starting in 1828, the canal historically played an important role in transporting goods, primarily coal. The canal, towpath, and surviving system of locks and structures, are now a national historic park.

The Operational Land Imager (OLI) on Landsat 8 captured these images of the Potomac River and canal on September 27, 2016. The top image shows the stretch between Hancock and Cumberland, Maryland—about 97 kilometers (60 miles) if you were to hike or bike along the towpath between these two towns. West Virginia is south of the river.

Original plans called for the canal to wind all the way to Pittsburgh, Pennsylvania, but cost overruns and construction delays prevented that from happening. One of the more infamous delays occurred near Paw Paw, West Virginia. The second image shows a detailed view of the region, where the Potomac takes on a sinuous shape. The meanders in this view are confined between parallel ridges running northeast to southwest.

Meanders along the rivers and streams in this region are not uncommon; they are visible in multiple locations in the top image. But the Paw Paw Bends curve to such a degree that engineers determined they would save 10 kilometers (6 miles) of canal by bypassing four of the bends incised deep in the bedrock. They decided instead to route the canal through the ravine of a tributary, and then excavate through shale rock to construct a 950-meter-long tunnel (3,118 feet), the largest structure along the canal. Work started in 1836 and was completed 14 years later—12 years longer than first planned.

A particularly curvy part of the Potomac River was a formidable challenge for C&O Canal engineers.