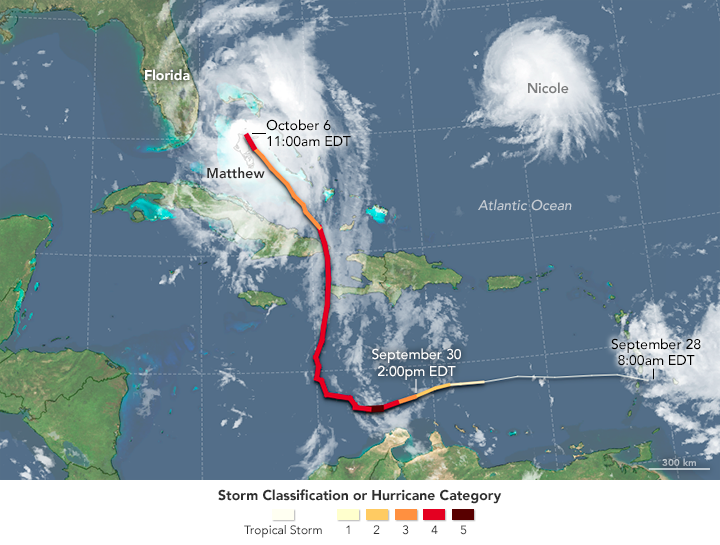 On October 4, 2016, Hurricane Matthew made landfall on Haiti and Cuba. The interaction with land, however, did not do much to weaken the storm. As of October 6, 2016, Matthew had strengthened and was expected to continue to intensify as it approached the east coast of Florida.

The still image above and the movie below show Hurricane Matthew as observed by NOAA’s GOES-East, a geostationary weather satellite that monitors the eastern half of the continental United States and the Atlantic Ocean. GOES observations in the infrared were overlaid on a true-color image of land and ocean created from Moderate Resolution Imaging Spectroradiometer (MODIS) data.

The still image was acquired at 11 a.m. Eastern Daylight Time on October 6, 2016. At the time, Matthew was located about 180 miles (290 kilometers) southeast of West Palm Beach, Florida, and had top sustained winds of about 140 miles (220 kilometers) per hour. Storm track and wind-scale data are overlaid on the image and show Matthew’s progression from September 28 through October 6. Tropical Storm Nicole is visible in the upper right.

Major hurricanes are those that reach category-3 status or higher on the Saffir-Simpson scale, with maximum sustained winds of at least 111 miles (178 kilometers) per hour. Matthew strengthened to a major hurricane on September 30, and was still a major hurricane when this image was acquired on October 6. It was predicted to maintain that strength for at least one more day. For comparison, the longest-lived major hurricane in the Atlantic Basin was Ivan in 2004, which lasted for 10 days as a major hurricane.

“While making landfall in Haiti and Cuba, it did a good job of threading the needle so it was not as significantly impacted by those islands as it otherwise would have been,” Klotzbach said.

The time-lapse animation is made up of images taken every 30 minutes from 10:15 a.m. EDT on October 5 to 8:15 a.m. EDT on October 6. It shows the storm spinning as a category 3 hurricane after hitting Haiti and Cuba, and heading toward the Bahamas and the coast of the U.S. Southeast. A few hours after this animation ends, the storm strengthened into category-4 as it approached the Florida coast. 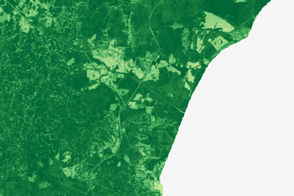