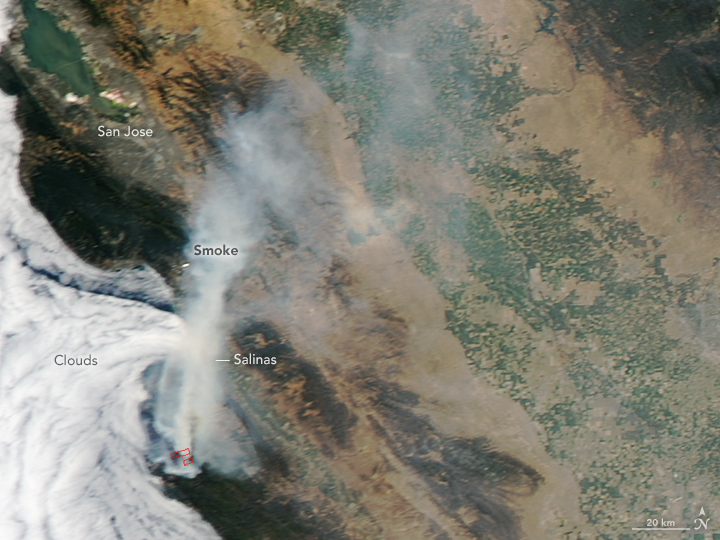 For nearly 11 days in late July and early August, wildfire has been burning near the California coast between Monterey and Big Sur. The fire started along Soberanes Creek in Garrapata State Park on July 22, 2016, and has since moved into Los Padres National Forest. According to news reports, CalFire suggested that in a worst-case scenario, the fire might not be fully extinguished until the end of August.

On July 30, 2016, the Moderate Resolution Imaging Spectroradiometer (MODIS) on NASA’s Aqua satellite captured a natural-color image (above) of the Soberanes fire as smoke blew north and east over the California Coast Ranges and into the Central Valley.

A day earlier, the Operational Land Imager (OLI) on the Landsat 8 satellite acquired higher-resolution images (below) of the fire. In the natural-color image, thick smoke mostly obscures the land surface. The second image—combining shortwave infrared, near-infrared, and green light (OLI bands 7-5-3)—penetrates the smoke to provide a clearer view of the burn scar. In this false-color view, active fires are bright red and orange, scarred land is dark red, and intact vegetation and human development are shades of green. (Note that the active fires, mostly on the south and east sides, are easier to see in the downloadable large image.) 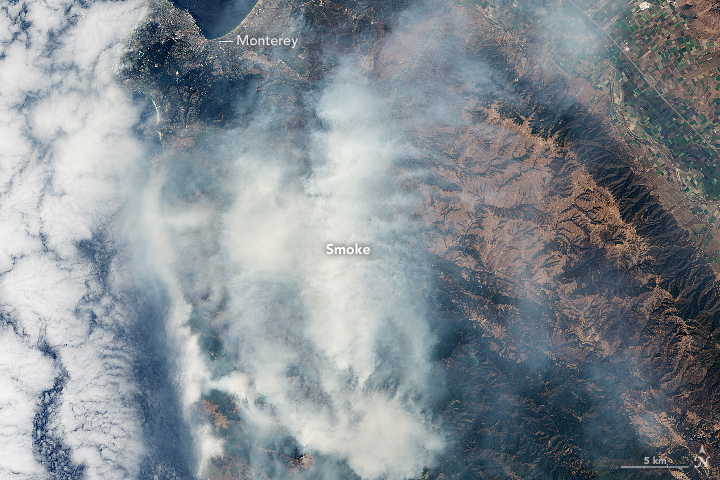 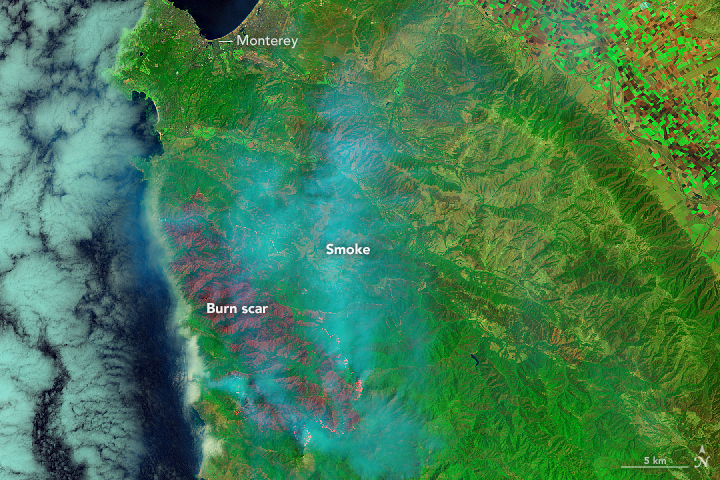 According to InciWeb, the Soberanes fire had burned 40,618 acres (larger than San Francisco) and just 18 percent of the perimeter was contained by firefighters by noon on August 1. At least 57 residences and 11 outbuildings have been destroyed. Six state parks have been closed, and hundreds of people have been evacuated. One man has died.

More than 5,200 firefighting personnel were involved in beating back the flames. The effort has been particularly difficult because of the steep, rugged terrain with little road access. The landscape is also primed to burn due to high temperatures, low humidity, and “an above-average cured grass crop,” according to CalFire. Meteorologists have noted an unusual local pattern where humidity drops at night (as low as 5 percent)—as opposed to rising, as it does in most other locations—causing the flames to grow more after dark. 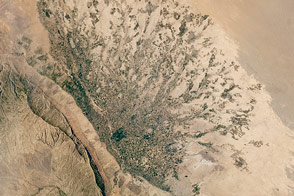